As usual Rodney McKissic of the Buffalo news is out in front of another UB recruit:

Reggie McKnight, a 6-foot, 161-pound WR from Hollywood Hills High School in Hollywood, Fla., has given UB a verbal commitment sources told The Buffalo News on Sunday. McKnight is the eighth verbal Jeff Quinn's staff has received from the Class of 2011. -- Rodney McKissic

This is the eight recruit UB has versus just two at this time last season. This sesaon alone UB has two out of Florida. 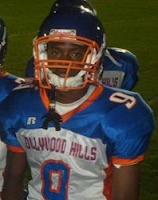 McKnight is described as "A quality talent who runs well, catches the ball in traffic and has the ability to make plays for the Spartans. As a junior, he showcased his skills and has become an offensive leader as he heads into his senior season." By the Miami Herald

McKissic is reporting that in adition to Buffalo McKnight had offers from FIU, Minnesota and Purdue.