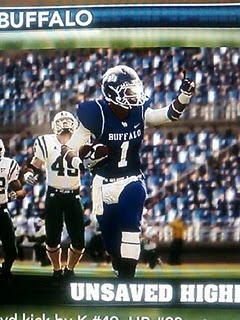 Despite some reports that James Potts would be unable to make camp, if he even managed to get enrolled James Potts is in Buffalo and will be in uniform for Camp.

Potts has been insistent that he would be in Buffalo, transcript and all in time for camp.Earlier this week his name appeared on the the UB Football Media Guide (With the Number 1), and finally today Rodney McKissic Confirmed that Potts will be suiting up this week.

"Florida recruit James Potts arrived on campus today with the other recruits from Jeff Quinn's first class and will participate in training camp, Quinn said today.

The Sun-Sentinel.com reported last week that Potts, one of the top tailbacks in Florida last season, still owed about $2,000 to American Heritage School of Boca/Delray where he attended high school. It was reported that Potts had to work off more than 200 hours, a condition of the scholarship he earned to the private school two years ago. American Heritage withheld his final transcript until the debt was paid, but a source told The Buffalo News that Potts' grandmother paid the bill and his transcript was released to UB." -- Rodney McKissic

Potts, despite being one of the most touted recruits in modern UB history, will have a tough fight for any kind of meaningful playing time. Ike Nduka and Brandon Thermilus are both solidly entrenched as the starters with Jeffvon Gill and Brandon Oliver tucked in behind them.

Post Spring Ball Depth Chart
Despite the long look up UB 2009 season is proof that those 4th and 5th backs can sometimes be the guys who keep your season together. Last season UB went through Starks (Injury), Thermilus (Early Performance), Henry (Early Performance), and Nduka (Injury) meaning that Jeffvon Gill, the 5th player down on the depth chart saw significant action.