Toledo took what could have been a phenomenal first season and turned it into a 'meh' transition year. Half way through the season the Rockets were sitting at 4-4, while the division was unlikely Toledo had dates with Miami and EMU which should have cinched a bowl invite. Besides the cupcakes they also had their annual grudge match against Bowling Green which, while not a game they were to be favored in, was a game they had a decent shot at.
When Miami notched their first, and only win of the season the Rockets went from Bowl contender to a squad behind the eight ball, dropping their final game to Bowling Green sent the Falcons to a Bowl and the Rockets Home. It's hard to fault the rockets too much for missing out on a Bowl, aside from the Miami loss they won every game they 'should have' and even stole one away from NIU but the performance of their defense, even when led by Barry Church, was the reason that the Rockets crashed.
This year they have to cope with losing Opelt (starting QB), DaJuane Collins (leading Rusher), Stephen Williams (leading WR/All MAC), and Barry Church (Best DB in the conference / FG Blocking freak). While they are note dealing with the numbers of losses that many mac teams are working with they are down quite a bit from last season. Its those losses that, in my opinion, are the gap between being a (near) favorite to win the west and only having an outside shot at a bowl.
The Rockets defense was the worst in the MAC, how you do that with Barry Church is beyond me but I digress.

I think the bad news for Toledo this year is that, on the face of it, there is not a whole lot of reason to think that they will be any better against the pass. Sure they had three true freshman in the secondary last season but it's not as if they got much better as the season went on and the loss of Church does not compare to the fact you now have three sophomore defensive backs. The folks over at LetsGoRockets (a great Toledo Blog, and defending MAC Pick'em champs) are more optimistic than I might be about the defensive situation.

From what we’ve heard, the Rocket defense will be improved this season. Obviously, there were facets of the defense where the Rockets were lacking. Whether the deficiency was personnel or play-calling or fundamentals (or all three), there were clearly areas that needed improvement to make Toledo competitive. Word from the staff is that they focused the bulk of their attention this off-season in fixing the defense and allowing changes to be made to facilitate their improvement. Will they be the top rated defense in the conference ? No. Will they be last? No. The defense should be much stronger than what was witnessed last year and as they solidify it will take some pressure off the offense to keep us in games and allow the offense some support and breathing room. We see no reason for Toledo to not be the the most improved (overall) team in the MAC this year. -- LetsGoRockets

The good news for Toledo is that Austin Dantin did get his snaps in last season when Opelt went down and he looked pretty solid doing it, he also will benefit from one of the more veteran lines in the conference. He also has Eric Page to replace Stephen Williams, and from what Page did last year there is every reason to believe he can step in for Williams. Offensively the Rockets should be able to play with anybody in the west.

Losing 2 NFL caliber players and a seasoned QB will be a challenge for the Rockets.  Church was a defensive leader and made key plays down the stretch (See NIU game)  Not having a QB who has seen very much actual play-time will also be a tough obstacle to overcome, but we feel Dantin will gain confidence from the move to starter (rather than injury relief last year) and the more games he plays, the more the offense should click. We’re fortunate to have a stable of talented WRs to help fill the gap left by Williams and give Dantin capable targets. -- LetsGoRockets

But even if the offense clicks, their woes on defense and a brutal schedule point to another restful december for Toledo:

There is no give me game on their out of conference schedule, the closest thing to that would be when Wyoming invades the glass Bowl. Purdue is another game that the Rockets may have a shot at but make no mistake Toledo going 2-2 out of conference would be a huge victory for the program.

A strong showing in our OOC schedule would be a confidence booster for the team. Purdue, in particular, has beaten the Rockets pretty bad the last few seasons and an early statement would bolster our chances of doing well in the bulk of our conference schedule. Nabbing a quick win against Arizona to start the season would certainly get things started on the right foot. -- LetsGoRockets

Their is not a lot of love for Toledo coming from the MAC front office in regards to division cross over games, Ohio and Kent are probably two of the top three teams in the East and they draw Ohio in Athens. They catch a break getting Bowling Green, and Central Michigan at home but drawing them so late in the season gives those squads 10 plus games to fine tune their retooling offenses.

Of course, the Toledo / BGSU rivalry is on every Toledo fan’s radar every season. But, the reality is that no one game can be overlooked and in the current landscape of college football, every game is a must win game. -- LGR

If Toledo is going to compete for the MAC West Archie Donald is going to have to carry a ton of the pressure on defense. Last season he had more than one hundred tackles


Donald is about the only sure thing on Toledo's defense, the unit had serious problems on the line last season and much of that sat with the defensive line. seniors Douglas Westbrook and Alex Johnson will join Sophomore T.J. Fatinikun, who played well as a true freshman last fall, is also going to be one of Coack Beckmans key linemen. Juniors Tackles Johnathan Lamb and Malcolm Riley sit atop a pile of potential contributors like Phil Lewis, Johnnie Roberts, Danny Roberts and Ben Pike. Toledo needs some mix of these players to create a pass rush otherwise their secondary won't be any more effective than last season.

Toledo is getting picked by many to finish second in the west, and by quite a few to win the west. Neither prediction is completely off base, but then again neither is another 5-7 season. Like any true fans the writers at LGR want to see a breakout season but concede that there is some room between their best case scenario and where they end up

In our approximation, finishing the season 8-4 would send a message to the rest of the MAC about Toledo’s return to success. Unfortunately, we fear those numbers might be unrealistic. A winning season would show that the transition back to winning is well underway and we’re turning this around. Toledo has difficult OOC games on the schedule this year and that won’t help matters any. A dismal situation would be another losing season, especially if there is no extraneous circumstance, like the plethora of injuries that hit the team last year (see UT’s 2009 QB situation). If we remain, for the most part, intact and still produce a 5-7 season - it will be evidence that more changes have to take place in Toledo. -- LGR

Best case scenario sees the Rockets get their pass rush on, stay healthy, and catch Purdue napping they split the Kent and Ohio games beat Bowling Green and lose to only NIU in the west. Even assuming they punt one game they should win they will finish 7-5 and play in a Bowl game.

The nightmare happens if the loss of Church diminishes an already struggling defense. The offense might eventually recapture last years potency but dropping six of their first seven is possible, and ending the season with seven, or even eight losses. 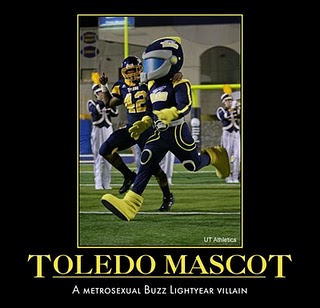