Editorial Note: The initial article contained erroneous information about Kent's schedule, I had them at Akron, thus five home games and six road games which would have been ugly! I was corrected on it by Mike Hrusch and some others. I have fixed the schedule and revised my thoughts on it. Apparently in the battle of insomnia versus quality insomnia wins.

It's been a long time since Kent entered a season with the expectation to bowl. The 1990's were as painful for Kent as this recent years have been for EMU. During this decade they have had two six win seasons but neither of those seasons led to a bowl appearance, you have to go back to the Nixon administration for that. It's been a long, long time for Kent and due to bowl game proliferation and some solid development Kent may break a 38 year bowl drought.

The Golden Flashes could have ended the streak last year if not for the luck that one expects from the Golden Flashes. Doug Martins crew was just one offensive weapon short in several of their losses. Buffalo, Akron, or even Bowling Green could all have been very different games if Eugene Jarvis had not went down in Week two against Boston College. If Kent takes any one of those games they are 6-6, and if the game they took was from Bowling Green they are in a bowl.

Still, it's not as if the freak injury in week two is totally to blame, if you're close in four or five of your losses then there is something else going on. Kent's inability to pass made a great defense meaningless. So the Question for Kent's season, and Maybe Doug Martins Career is this, can the flashes generate any kind of offense this season?

Kent's defense, particularly in conference games, was very effective last year. Five times they kept their foes at or under 20 points, and only twice did they surrender more than 30. They were the fifth ranked scoring defense in the conference, and its a defense that spent more time on the field than all but three MAC teams (Akron, Ball State, Ohio).

Aside from two difficult road games at Boston College and Penn State Kent's schedule sets them up for a pretty good season; if they can get through the early part in which five of the first seven games are on the road.


Drawing Ball State and EMU from the west are a huge blessing for Kent. Unlike the other two teams who are favored in division who have a harder draw. They also have Army and Murry State (FCS) so they are staring at four games that any Bowl bound team should win. A win over Akron or Miami (Both on the road) sends them to a bowl.

In addition to being a likely bowl participant Kent is getting looks as a dark horse in the MAC East division, drawing both Temple and Ohio at home and starting out MAC play against Miami, Akron, and Toledo makes a six win conference performance somewhat realistic. If they manage to beat Bowling Green on the road it's likely that Temple will be facing a team that is 5-0 in conference play.

Finally the schedule give Ohio and Temple a harder cross division draw pitting them Northern Illinois. The huskies games could be the difference makers for the flashes if Kent can take care of the games that they should win.

Aside from the schedule there is not a lot of bad news for the Flashes. Jarvis will get a do over of his senior year, and Spencer Keith is not longer a true freshman in over his head. Keith was remarkably consistent for a true freshman last season, only once did he throw more picks than touchdowns and his completion percentage was sub 60% only three times.


The focus on the Pistol formation is the one thing working against Kent on offense this season. Keith would work far better as a pro set quarterback, or even a spread, than he will as a dual threat in the Pistol. Though Jarvis is good enough to make that offense work almost single handily you still should not handcuff the next leader of your offense. The Pistol also seems like a minor waste of Tyshon Goode's talent.

There is little reason to worry about the defense this year, ranked fourth and 17th nationally in tackles for loss and sacks the unit should have little, if any, problems putting pressure in the backfield. The downside for Kent is that if you can get by, or nullify, their pressure in the backfield it is a defense you can move against, I just don't see too many MAC offenses holding up Brian Lainhart, Cobrani Mixon, Monte Simmons once they get their minds on being in the backfield.

Kent's dream season sees them down Toledo and walk out of Bowling Green with a win, toss in an upset against Temple and the Flashes could walk away with the East. At that point their out of conference performance is academic but for the sake of argument throw in two and two and the flashes could be looking at nine wins.

The nightmare happens if Kent is, well, Kent. Last year should have been their breakout season but the Flashes have all the luck of snake on a four lane highway, if they get run over again this season it could very well be Doug Martins last at Kent.

If one key player gets hurt, or the Pistol focus puts their offense back in the gutter they could drop games to Bowling Green and Toledo. They could be looking a three conference wins and one or two our of conference for a five win season, that might be enough for Doug Martin the boot, even at Kent. 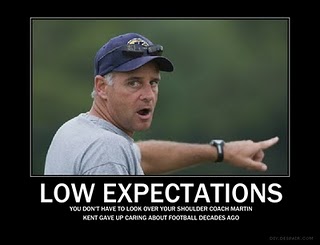