Only two teams come into this year on a winning 'streak'. The first is Central Michigan, the second is Northern Illinois. Of the two NIU is the odds on favorite to extend their streak of Bowl Appearances (though CMU has a better shot than many give them credit for).

After the  Joe Novak era ended with a dismal 2 win season, and Novak's subsequent retirement, NIU brought on Jerry Kill. Kill's first season delivered a surprise bowl game despite being pitted against a very strong Western Division (Ball State 12-0, WMU 9-3, CMU 8-4. Losing the Independence bowl (mainly due to turnovers) put the Huskies under 500, but when a team breaks in a first year coach with a 6-7 record and a Bowl Game, fans tend to be pretty happy.

Last season NIU was picked by most to finish third in the west, if they had played consistently the Huskies could have taken advantage of WMU's struggles and been within shooting distance of CMU in week 10. Looking at their body of work last season two games stand out as letdowns.

After playing Wisconsin to the wire and downing Purdue the Huskies looked like they might run through everyone, save maybe CMU, on their schedule. But following an emotional high point against the Boilermakers the Huskies hit a low against Idaho.

The Huskies defense came out flat and let the Vandals get ahead by 15 points midway through the third. NIU would mount an impressive comeback to get within three but again the defense disappointed, letting Idaho milk the final five minutes.

The loss to Idaho, while painful, was a paper-cut compared to what Bary Church did in week six. Toledo, not a team generally known for a stout defense, held NIU to under 20 points. The highlight of the game was Barry Church blocking a late fate field goal which would have put NIU ahead.

This year the Huskies are playing three of their four out of conference games against BCS conference teams and on the road. It is a pretty daunting way to open up the season even if the teams that NIU is lining up against are not exactly the prime candidates from their conference.


Last season Iowa State, Illinois, and Minnesota had a cumulative record of 16-22 (8-6 out of conference). The Gophers and Cyclones played each other in the Insight Bowl but both of these teams, and Illinois are  well within the Huskies weight class. An out of conference of 4-0 is distinctly possible, two wins should be a bare minimum.

After rolling through the out of conference slate NIU takes care of their cross divisional games, including a possible conference Championship preview against Temple. By the time the they get through week eight the Huskies should be past the meat of their schedule. If you have to end your season with three of four on the road might as well do it against the bottom three teams in the west.

Tracy Claeys defense is usually the first thing that any one notices when looking at the Huskies. But even though NIU's defense usually steals the show their offense has quietly become one of the more successful units in the conference.

Last season NIU was one of just five teams in the MAC to average more than 28 points a game:


This season the Huskies are returning eight offensive starters. The offensive losses, which are mainly on the line, might bite them early but by the time conference play rolls along the unit should have any kinks ironed out.

The Biggest concern on the line is the loss of  center Eddie Adamski but his projected replacement, Scott Wedige, is big athletic and has spent a bit of time on the field (Mostly in a special teams capacity).

The line is going to be mainly blocking for Chad Spann who is pretty much a lock to lead his teams offense. Last season he scored two or more touchdowns scores in eight of NIU's games and was second only to Freddie Barns in points scored on the season (well ahead of Bernard Pierce).

Spann's backup, Meco Brown, departed NIU a year early for "family issues". This is going to put a considerable burden on a committee backfield. While Spann is clearly "the guy" having someone like brown in you pocket was clearly a benefit to coach Kill.


In line to replace Brown is JUCO transfer Jasmin Hopkins who might leap frog Ricky Crider on the depth chart. The Huskies also have interesting option in Cameron Bell. At 6-2, 245, the Iowa State linebacker turned Northern Illinois half back may see a lot of time in short yardage or goal line situations.

All NIU needs out of its QB (Probably Harnish) is to effectively manage the game. With the running game and defense that Coach Kill puts on the field chances are that the Huskies won't be looking at too many huge come from behind efforts.

Last season the Huskies did a great job picking up the slack for MAC MVP Larry English. The expectation by many was that the loss of English might soften the Huskies front line significantly but Jake Coffman picked up exactly where English left off in 2008:

After pulling Farve during the off season Coffman, a former Marine, decided to stay for his last year at NIU. Without him the Huskies were going to have a great defense, with him NIU will probably be one of the best units in the conference, again.

With Coffman back the defense returns nine starters from a squad that led the MAC in total defense, ranked second in sacks and tackles for loss, and finished third in scoring defense.

About the only way to attack NIU is to go after their defensive backs. If you can manage the pass rush, which is a huge task in and of itself, you face a defensive backfield which is not nearly as dominating as the front seven.

Most polls are picking NIU to win the west. Among MAC bloggers the Huskies received nine of twelve first place votes, the media in attendance at MAC media day gave them fifteen of twenty votes. This season NIU is clearly a program with a target on their back.

NIU's dream season sees them sweep their out of conference slate and drop at most one or two games in the division and surprise whoever comes out of the east in the MACC East (Temple or Ohio). They then go on to win a their bowl game. It's seriously hard to believe that an NIU team with a MAC Championship, a Bowl victory, and more than eleven wins (counting the MACC and the bowl) wont finish the year ranked in most polls.

The Nightmare happens if Chad Spann, trapped behind a misfiring offensive line, is not able to carry the offense. With what NIU is bringing at defense it's still hard to see them losing more than six games but when you cant score it doesn't matter how solid your offense is. Breaking in a new kicker is not going to help the cause and the Huskies limp to another Bowl with a 6-6 record. 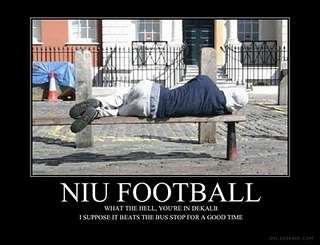