After decades of struggle, and years of total ineptitude, Temple football has become a force to be reckoned with, at least in the MAC. After nearly running the conference table last season Temple was rewarded with a back yard bowl game (Similar to Buffalo and the International bowl in 2008).

But all last years success should be taken with a grain of salt. Temple's conference schedule last season was mathematically the second lightest possible MAC schedule. They only played one MAC team with a winning record, and that team easily dispatched them

After all Temple dropped their season opener to a Villinova team that, while respectable, does not even play in the Bowl Subdivision. Following the Nova' game Temple got their annual throttling against Penn State. When the finally lined up against Buffalo many, including me, had written off the Owl's. Sure they beat the pants off of Buffalo (who would finish 5-7) and then beat such power houses as EMU (by 12), Ball State (by 5), and Army (by 14). Sure after beating Toledo Temple was sitting at 5-2 and well on their way to their first bowl game in years. But they still had not beat any team that was going to finish with a winning season.

With the conference draw one might be tempted to write off Temple 2009 as a middling MAC team with a very easy schedule. That would belie the fact that Temple punished Navy and gave UCLA all they could handle.

Make no mistake Temple is nearly a lock for a bowl game this season, and a real contender for the conference crown. Given that their conference schedule includes CMU, NIU, and Ohio, and their out of conference schedule pits them against Penn State, UConn, and defending FCS champ Villinova an 8+ win season this year can't be chalked up to the scheduling fairy.

While the Owls had a respectable defense, one of the better in the MAC, their fortunes last season were tied to the offense and Bernard Pierce more than anything else. In Temple's three regular season losses Pierce only carried the ball 13 times in two games and completely missed the game that decided the east division (Ohio).

In their bowl game against the Bruins Temple seemed to completely figure out UCLA mid way through the second and established a 21-7 lead solved until Pierce was forced to leave the game with three minutes left in the second. From that point on Temple's offense was the picture of ineptitude.

Temple manged just 63 yards of offense in the second half with just on respectable drive. They had two turnovers, a failed fourth down attempt and a safety. UCLA, more than any game of the season, demonstrates not only that Temple had a one dimensional offense last season but that they have just one man who can be productive in that role.

Not only are they playing a possible top 15 team (Penn State) and someone who will likely be in, if not finish in, the top 25 (UConn) but they also face a Villinova team that rained on their parade last season. What was a joke to other MAC fans in week one ended up looking respectable when Nova' on the FCS title. About the only 'give me' game on their OOC schedule is match up against Army.

In conference Temple get their first difficult cross over draw in recent memory. First they host defending MAC champs Central Michigan. While the Chips may have lost a lot of offensive talent they still bring one of the better defenses in the MAC. Their other cross division draw is against Northern Illinois in what many believe will be a MAC Championship preview.

Temples two biggest games, according to The Owl's Nest, are UConn and NIU. Both respectable opponents and both within Temples range of fire.

In-conference, the biggest game of the year will be Northern Illinois. NIU is expected by many to win the MAC West, as well as to possibly win the MAC Championship. The Huskies will be the main challenge for the Owls besides Ohio and Central Michigan.

Out-of conference, I would always want to say Penn State; however, I'm going with UConn. Connecticut is the second best win on this OOC schedule, and of the two BCS teams Temple faces is the more likely opponent to beat. We owe them for the last two matchups , anyway. - Dave, TON

If you want to know what Dave means by 'Owe Them' this might help:

About the only thing that fell Al Goldens way, scheduling wise, is the OU-Temple game being played in Philadelphia. It's pretty likely that the winner of this game will win the MAC East.

Two things need to hold true for Temple to go Bowling, and perhaps win the conference, this season. The first is that Temples defense needs to keep dong what it has been doing and Bernard Pierce must stay healthy.
Temple's Defense has been steadily getting better and better over the past few years. The 2009 edition was maybe the best defense of the Al Golden Era but 2010 looks to be even Better. In addition to the seasoned talent at his Disposal Coach Golden has a handful of Freshman who could make an immediate impact:

I think that we'll see several redshirt freshmen including Levi Brown and Shaheed Paulhill make some plays. Jaimen Newman is another incoming freshman as well that people are talking about - Dave, TON

Unlke the offense Temple's defense does not live or die by a single player. While Adrian Robinson dominates the game like few MAC defenders he does have a nice supporting cast that could shut down most MAC offenses. On the other end of the line Muhammad Wilkerson is also an All MAC first team selection.

"He (Robinson) has been an absolute dominant force in his two years as an Owl. He has a motor that never gives out, and is quick on his feet to get to the quarterback. - Dave TON"

The Temple defense itself could likely carry the Owls to five or six wins, that has been Al Golden's vision of the owls since he first arrived, and the units production and standing have proven his effectiveness.


On offense it's Pierce, Pierce, Pierce. While he sits behind one of the better lines in the conference Temple is still going to need Bernard Pierce to stay healthy. Aside from Pierce, and the line, there is not too much to get excited about in Temple's offense.

Somehow, my guess is a drunken game of musical chairs, last years staring Quarterback landed as the teams new tight end.
Don't get me wrong, Aside from the Snazzy ties getting Vaughn Charlton as far from under center as possible is one of the most sound decisions Al Golden has ever made. But that decision leaves the owls offence in the hands of Chester Stewart. Early in the season the Owls are hit the most difficult stretch of their schedule and they are going with a guy who has thrown ten touchdowns against eleven interceptions throughout his career.
Chester Stewart has thrown at least on pass in 11 games, only twice has he thrown for more touchdowns than interceptions (Miami in 08 and Akron in 09).
Dave from the Owls Nest is way more optimistic than I am about Temples Passing game, even Vaughn Charlton's role in it:

He (Stewart) has put in a lot of work this off-season, and I am not worried at all about the talent level. I think Owls fans were thrown off a bit by Vaughn Charlton's sudden move to tight end, but so far reports are that his transition has worked out just fine, and he is in fact competing for a starting spot. Stewart has done well thus far through the team's summer practices.

Coach Golden and his staff focused the 2010 recruiting class on wide receivers. The passing game in 2009 was extremely ineffective to be honest, but that didn't stop the Owls from finding production on the ground. This season I'd expect to see a lot more coming from the wideouts. Teams will expect the ball to go to Pierce most of the time, which will give Temple plenty of opportunities to surprise teams in the air. Michael Campbell, Joe Jones, Delano Green, Rod Streater, Deon MIller-- all names you should look out for. - Dave, TON

The Idea that Stewart is going to make something of Temple's passing game is pretty far fetched, but then again so was the idea of Temple going to a bowl game after the Big East punted them. Weather or not Stewart manages to provide an air attack may be pretty meaningless this year. It might be the difference maker in the MACC or bowl game but Temple can ride Pierce seven or more wins without too much trouble.
Pierce is a contender for the conference player of the year and if some are to be believed a trip to NY for the final announcement of the Heisman. Dave tends to be a little more grounded in reality:

I think that many people are taking the idea of Temple pushing B.P. for the Heisman too seriously. The campaigning for Pierce has not been out nationally, besides his time on ESPN First Take and College Football Live. The idea has been to make Philadelphia sports fans aware of the Owls, and that it is worth coming out to see a heisman-caliber player take the field in their own city.

Is there honestly a shot for him to win the Heisman after just a freshman year? I don't think so; however, if B.P. can improve on his numbers over the next year or two, I think that a few more heads will be raised. -- Dave, TON


Temple's dream season sees Pierce and his line stay healthy and Stewart provide a respectable passing threat. That and the defense might be enough to run the table in the MAC and win two or three out of conference. Temple wins 10 games, wins the MACC, and wins their Bowl.

Temple with 12 wins (counting the MACC and Bowl) and ranked in the top 25 might be a dream but it may mean that Coach Golden moves on to a BCS conference. Many Temple fans feel Golden has already passed up so much that only Penn State will do. But assuming that the Temple / MAC deal gets renewed at some point Al just might decide not to wait.

"Al Golden thus far has turned down offers from Syracuse, UCLA, Boston College, and other programs. He mentioned that he is not interested in the Penn State coaching position (I'm sure he is). If Temple wins the MAC/Bowl, who knows where the program is headed in 2011." Said Dave, "That 5-year(?) contract extension says something as well."

Speaking as a fan of a team that got a rolling five year extension from its coach in 2008 you'll have to pardon my skepticism at what a mid major can expect out of such a contract move.

The nightmare season happens if either Pierce, or his line, misses a significant portion of the season. Dave and I both agree that Injury is about the only thing that could completely derail the Owls this season, in Dave's words "a Healthy offensive line, healthy running back, and I think we're set.". If there is injury Chester Stewart may not be up to running the offense. Temple might get to a Bowl Game on the backs of the defense but they will limp into the game and probably get killed once there.

This demotivator is devoted to the legion of Temple fans who think one season above 500 is enough to prove they 'own' the MAC: 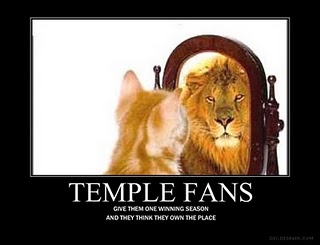