Share All sharing options for: Know a foe: #2 Baylor 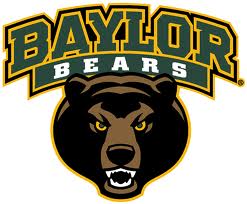 Traveling to Texas to play is not ever going to be easy, UB barely escaped from El Paso last seasons against a team that is not nearly as good as Baylor will be this season. The early trip to the lone star state will provide the Bulls with one of their two most daunting test of the season. There is an upside and a downside to playing Baylor so early in the season. The up side is that after one week of warming up against Rhode Island UB will be tested before they hit their out of conference must win against UCF. The down side is that you are almost a lock for losing this game in week 2.

Beating a BCS team is huge for a team for a non BCS conference, even if the team defeated is not a powerhouse. Toledo's shootout against Colorado was a nice feather in their cap, even if the Buff's were at best a middle tier BCS team. Baylor is not a top 25 team but they are likely a better program than CU was last year so walking out of Texas with a win would be a huge step for Jeff Quinn's Bulls.
The only time UB has played Baylor was in 2007 when the Bears came to Amherst and downed the Bulls 34-21. In that game Baylor Quarterback Blake Szymanski was 21-of-45 for 172 passing yards, and added 91 yards rushing, including a 39-yard touchdown scamper in the fourth quarter for the Bears. UB was leading 7-3 late in the first half but were wore down in the second half .
The one bright spot for UB was James Starks who had 95 total yards and three touchdowns. UB Freshman Davonte Shannon grabbed his first pick.
Baylor This Decade:
The Bears have been the punching bag of the Big XII south. During the past ten years Baylor has had the worst records in the south division. Over that same period that have not managed a winning record, only in 2005 did they come close when they finished 5-6 (You need to go back to 1995 for the Bears last winning record).

Who Calls the shots: 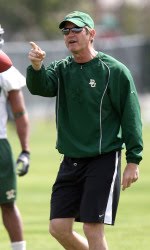 Art Briles is entering his third year at Baylor and at 8-16 has put together the second best two year run that Baylor has seen since the dot-com boom. Briles is Texas through and through, he was born there, he played his ball there, he coached HS there, and has coached for two Texas college teams there

Briles began coaching various High Schools from 1979 to 1999 until he finally landed a college job when he became the Running backs coach for Texas Tech.

After two years working in the Red Raiders backfield he was hired on to coach for Houston (CUSA). His stint with the cougars led to one conference title and four bowl (though he only coached in three of them.)

Recently Briles made news for being the last man on Earth to find out that it's not a contract but the benevolence of Texas and Oklahoma holding the Big12 together, a reporter at the Big 12 Media Days let him in on the secret:

PETER IRWIN: Art, coming from Baylor, what are your thoughts on the Big 12 being held together verbally and not contractually?
COACH BRILES: Is it not contractually? You're telling me stuff that I don't even know.

PETER IRWINThere's nothing holding the league together. It's just the word of the higher-ups.
COACH BRILES: You're on the inside? That's the word through the media? I don't know. Honestly, that's the first I've heard of that. I'm sure there will be a contract signed. There's people in that room that know that answer. I mean, where I'm from, verbally works for me. You know what I'm saying? If I tell you I'm going to do something, I'm going to do it. You may not have to shake my hand. If you look me in the eye and say, Coach, I'm going to be there at practice, I'm going to expect you to be there. If I tell you, I'm going to go out and buy you lunch today, it's my day to buy lunch, forget your billfold. So verbal works for me.

Baylor's season fell apart last year when Quarterback Robert Griffin went down, he is that critical to their offense. The Big 12 Freshman of the year (2008) also ran the best 400 time at the NCAA and Big-12 Championship meets. While playing FCS opponent North Western State Griffin tore his ACL and has been on rehab ever since.

Griffin is a potent dual threat quarterback who passed for 2,000 plus yards and ran for more than eight hundred and fifty (against big 12 defenses). This season Griffin does not have the experience around him that he would have had last season but Baylor does have Big XII talent (read big and fast skill players and a big line).

On defense Antonio Johnson is the only experienced starter on a  line backing unit that has had to cope with the defensive line being unable to the QB. Last season the linebackers made the Baylor pass defense tolerable this year they are going to need to get pressure from the front four.


UB has traditionally not done well with mobile QB's so someone like Griffin who is literally a track star worries me. the Potency of Griffin plus the relative inexperience UB will have with their new offensive system makes this a scary game.


If this was an old school game of Punch Out who are these guys?

Mike Tyson's Punchout Evaluation: This one might leave a mark!

Much like Soda Popinski (aka Vodka Drunkenski) Baylor is a team that's going to punch away offensively.  While UB may have some trouble getting its own shots in the real danger is that Robert Griffin will take advantage of the fact that our defense has seldom seen a team who's skill positions are as fast as the Bears.

This is a game that UB *could* win, but really I give them just a punchers chance (1/5 times) at going into the 4th quarter with any shot at the game.

Baylor comes out fast and gets up by two touchdowns in the first quarter, eventually UB starts to settle down and goes into the half down by two. The defense begins to figure out Baylor in the second half but the offense, still pretty new in the spread, struggles against the size and speed of Baylor.

I have not, despite some real effort, managed to find a decent Baylor blog but BaylorFans seems to be a pretty lively message board.