Share All sharing options for: Know a foe: #4 UConn

Given that the MAC Kickoff countdown covers all conference opposition UB will face this season this summers know your foe is going to wrap up with the last non-con game on the 2010 schedule. The Bulls second BCS conference opponent offers up the biggest challenge of Jeff Quinn's inaugural season in Amherst.

While the Big-East has mysteriously earned a reputation as a 'weak' BCS conference teams like UConn, and to a lesser extent Rutgers, have helped that conference recover after the early decade ACC raid. While they are not a 'power' player within the conference the Huskies have held their own over the past several years and have done more with less highly touted conference talent than any other Big East team.

Last season The Huskies topped off a solid regular season run by downing the Gamecocks for their third Bowl Win in the past six years.  Despite being picked to finish sixth in the Big East the Huskies are returning sixteen starters from their 2009 squad. Connecticut is a team hardened last season by both on the field challenges and off the field tragedy, losing a few starters should not keep the huskies down, in my opinion picking them lower than 4th is selling the squad way short.

UB and UConn share some common early roots. One of UB's pre world war two coaches, George Van Bibber, would later land at UConn where he would take over their entire athletics department. Several years after Van Bibber departed the two teams would play for the first time.

The Bulls and Huskies played a total of six games before the modern Era, splitting those match-ups 3-3. Since the program was rebooted in 1977 it's been all UConn. Connecticut has won ten of eleven meetings since 1995, including the 2009 international Bowl.

The Huskies rode in a season earlier than expected when Boston College, Miami and Virginia Tech all bolted for the ACC in 2003. Their move from FCS to FBS was nearly seamless as they went 8-4 in their initial season and trounced Toledo in the Motor City Bowl. Overall the Connecticut has had four winning seasons, four bowl appearances, and three bowl wins during their six years of Big East play.

Who Calls the Shots? 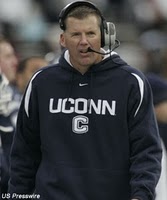 Radny Edsall has quietly become the dean of Big East Coaches. Not only has he been coaching at his school longer than any other coach he is also the only Current Big East Coach who has won a conference title (at least a share of one).

Edsall played for Coughlin at Syracuse University and later coached under him at Syracuse, at Boston College and with the Jacksonville Jaguars. He was rumored to be on the Notre Dame short list last season but nothing came of that.

He has a reputation for finding talented yet under recruited players and turning them into a competitive squad. He has not made UConn into a dominating Big East team (only one winning conference record) but year by year he seems to be getting closer. 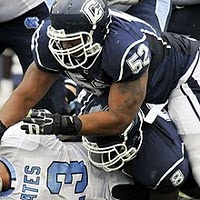 What sets him apart is his ability to play the run as well as he can cover the pass. Wilson can hold his own against most backs and tight ends in man to man coverage making it more difficult for spread offenses to pick on a 'weak' part of the defense. 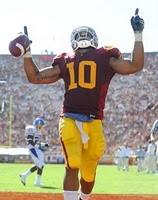 Not like the Huskies needed the help but they sure will welcome USC ship Jumper D.J. Shoemate into the fold. Connecticut already had a solid Junior Tailback in Jordan Todman but the addition of another solid back helps relieve the pressure on Zach Frazer. Frazer has talented wide outs coming into this season but none of them have ever been the guy that defenses are forced to key on, that's going to change this year.

Mike Tyson's Punchout Evaluation: This team has the potential to beat us like a drum


If any one team on our schedule can put UB down like the sandman it's UConn. During the 2008 international bowl we saw just what a Randy Edsel coached team can do against UB. Considering the talent they had at tail back that year the defense held up their end but the offense just could not solve the UConn D and Buffalo mainly stayed in the game through great special teams play.


If Quinn has UB playing at the Level of UConn an eight win season is almost a certainty, this will be a fine gauge of just how far the team has come before they hit conference play.

Right now I don't see how UB wins this game short of a total end epic collapse by Connecticut. UB still has not settled on a quarterback and the Huskies have probably the best defense we will see all season. Best hope for UB is to come out of the game uninjured, unembarrassed (keep it within17), and ready for conference play.

The SBNation Husky Blog, boringly named 'The UConn Blog' has everything you'll need if you want to keep up with any Developments in East Hartford. If you must go message-boarding the Connecticut scout board 'The Bone Yard' (at least somebody is trying) is where you should head.