This week the Bulls are officially breaking what has affectionately become known as 'Camp Quinn'. With Rhode Island only days away here is a quick primer for those of you who have skipped Camp, or have decided not to pay attention this summer. 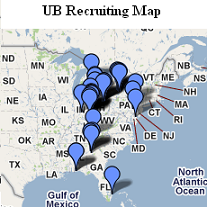 Item #1 Recruiting: On the recruiting side Quinn has been phenomenal. Thus far UB has nine more commits this August than Turner Gill manages last season. Quinn's focus on New York and Ohio has been refreshing.

As one might Expect Quinn, the former OL and Wrestling coach, went early, and often, to the offensive and defensive lines. But what was unexpected is how well Quinn fared locally.

The Biggest local name so far is Quarterback Joe Licata who had garnered an offer from Syracuse and had serious interest from North Carolina. Syracuse rescinded the offer when Licata did not commit quickly enough. The move by the Orange and Quinn's appeal was enough to land the local star.

While Licata demonstrated Quinns commitment to local talent the verbal commitment of Pat Williams from Florida shows that keeping some of the inroads into the south is also on Coach Quinn's "to-do" list.

Item #2 Culture: Coach Gill was a great players coach, and a pretty decent ambassador but aside from the enthusiasm that winning brings he did nothing to put his mark on the UB Fan Base. Quinn has been all about helping to brand and sell UB football to the Buffalo/Niagara region in a way that I have never seen.

The mottos "Next Bull In", "Arrive with a bad attitude", and "We'll provide you with everything but guts" are all catchy but new coaches generally bring in catchy new mottos.

Two hours before every home game the team buses will arrive on campus from the Flint Rd Entrance and make a right onto Augspurger Rd. The buses will stop in between Flint Apartments and the Special Events Lot (True Blue Tailgating Lot) and will drop the players and coaches off. From that point the team will march down Augspurger Rd to the stadium led by the Thunder of the East marching band, dazzlers, and cheerleaders.

Item #3 Philosophy / Schemes: The change of philosophy on both sides of the ball is going to make the second half of games far more entertaining than in the past. Coach Gill far too often tried to sit on a lead, as a result of bland play calling and soft defense the Bull kicked away three games they should have won last season.

Offense: Quinn has decided to go all in on the spread despite the fact he is not working with athletes that were not recruited for the system. It's a pretty bold move but it's a maneuver that sums up coach Quinn very well, give it everything and let the rest attend to itself

"I know it will take all spring, this summer and fall camp to implement the offense, defense and special teams. We will be ready for Rhode Island at home on September 2nd." -- Coach Jeff Quinn

Wide Receiver: The obstacles facing UB's offense are pretty impressive, especially at receiver. Roosevelt, Hamlin, and Rack were UB's passing attack last season and now all three are gone. If anyone of them were here I would feel far better about our luck with the spread.

These are the players who will have to fill those shoes. Throughout spring ball the younger receivers, especially Devon Hughes, Ed Lee, and Alex Neutz impressed onlookers and added a boost to this falls hopes

Wide Receiver Fred Lee made an acrobatic catch in the end zone, while being pulled to the ground by the defender. Lee was able to turn his body and dive for the ball that was thrown low and behind him. -- UB Athletics


The vets; Young, Jackson, and Rivers all looked a bit better than many had anticipated. Between his size and speed Rivers has a ton of potential but his hands have been questionable. Looking better so far but until they line up across from another team it's hard to know if he has shaken off the stone hands.

Quaterback: Though I think receivers is the biggest issue most of the preseason coverage has been about the quarterback situation. It all started when Zach Maynard could not bear a Buffalo world which did not include Turner Gill:

Eventually Maynard rode his brothers coat tails to Cal leaving Buffalo with only one quarter of experience among the entire team. Jeff Quinn moved quickly. First he augmented the recruiting class with Alex Zordich then, later in the spring, he brought in Tyler Warden as a walk on candidate.

Jerry Davis was seen by most as the favorite to win the job, but after Alex Dennison put up some monster numbers during the spring game things got a little muddy. His performance was enough to force Quinn to release his two deep without a starting quarterback listed.

UB Nation seems pretty set that Davis will be the guy to get the role but have believed, all along, that its unlikely UB starts and finishes the season with the same signal caller this year.

The race is so close, and Quinn's system so demanding that he has not ruled out the fact that none of the candidates will be 'the guy'.

"Sometimes it's injuries, sometimes maybe it's just not clicking [at quarterback] for whatever reason and you have to get somebody else in there. When do you do that? It's not an easy answer." -- Jeff Quinn

Right now it seems that Davis will take the first snap of the Quinn Era, but given how tight the competition was, and the fact UB is playing a mid level FCS team expect each to see a ton of playing time next week, you may even see one of the true freshman get a few snaps in.

Running Back: Aside from the defensive backfield, which I will get to below, running back is the one area that UB does not really have any reason to worry. The torn Pectoral that stole away James Starks last season at Buffalo provided for a 2010 season which returns three backs that had significant work last season.

Most UB fans went into spring thinking that the Jobs was Nduka's to lose. In a preseason Poll 45% of respondents picked him to be the primary F-Back.

That belief proved entirely incorrect. Thermilus is now rumored to be the guy. Coming out of Coach Duval's own summer camp Thermilus looks streamlined and faster than in years past. Gill is seen by many as the probable number two back mainly because he will be extremely dangerous coming out of the backfield.

Offensive Line: The Offensive line, anchored by Peter Bittner, has be reshaped by coach Duval into a unit which is hopefully quick enough to protect a spread quarterback. Quinn was not impressed with the overall fitness of the offensive line when he arrived in Amherst but seems pleased with the work they did with Duval over the summer.

Defense: On defense Quinn is abandoning Gills 'bend but don't break' defense and turning lose his talented defensive backfield. The Bulls are also going to a multiple set defense which moved to running the 3-4 and 3-4 hybrid more and more as spring, and then summer, progressed.

It's going to be a nice change, and a necessary one if the Defense is to carry the load early in the season. Buffalo's recent squads have all been highlighted by big offensive names. Willy, Roosevelt, and Starks are gone (as are Hamlin and Rack). What remains is an experienced defense.

Secondary: The defense with its secondary set to attack could improve it's standing in the conference (there were fourth in the MAC last season). Davonte Shannon is on pace to break at least one school record, three records are realistically within his grasp.

He should benefit more than anyone else from the new defense. The rest of the backfield will benefit as well. Cook and Thomas are both Proven in the backfield but safety has a big gaping hole where Mike Newton used to sit. Two underclassman Isaac Baugh and Ray Anthony Long are fighting for the job.

Linebackers: The line backing unit was almost as deep as the half back slot before spring ball opened up but injury and bruised ego's took a bite out of the group. The first hit happened in April when Scott Pettigrew went down for the year. Not long after that the highly touted Darius Willis departed after some discontent over where he landed on coach Quinn's summer depth chart.

Those two losses, and the departure of Nick Sizemore who may have been able to find his place in a slightly thinned out depth chart, moved the line backing corps from one of the deepest on the team to one that needed a bit of shifting.

Justin Winters is moving from outside to inside and he will pair up there with Raphael Akobundu.  On the outside Redshirt freshman Khalil Mack had himself a solid camp, edging out the competition for the starting spot. John Syty will likely start the other.

Defensive Line: Steve Means is going to lead a defensive line that desperately needs to get it together this season. Means provided the only thing close to a pass rush that UB managed in 2009 and might be the first feature lineman at UB since the departure of Trevor Scott after the 2007 season.  Anel Montanez (nose tackle) and Jerry Housey (defensive end), both reportedly among the prime beneficiaries of summer strength and conditioning drills, will complete the starting line.