Share All sharing options for: Brandon Tammaro: Quinn hits 10 recruits before the season 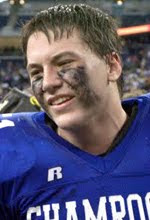 According to Rodney McKissic, UB has hamered down their tenth Recruit:

Brandon Tammaro, a 6-foot-3, 230-pound defensive end from Detroit Catholic Central, has given a verbal commitment to UB, a source told The Buffalo News Sunday night. Tammaro is the 10th commitment the Bulls have received from the Class of 2011. -- Rodney McKissic, Buffalo News

UB Continues to bolster the trenches as Tamaro Joins five other recruits who are offensive or defensive linemen; Kilin, Back, Blodgett, Williams, and Felicia

ESPN Says the following about Tammaro:

Tammaro comes across as a defender with a good motor. The kid seems to give good effort and will battle to get the job done. Displays a solid frame to develop, but needs to add serious bulk and keep improving overall strength. He has a solid get-off. He brings his hands when coming out of his stance and does a solid job of maintaining some separation. Does a good job of being able work laterally and stretch a play. He is adequate at the point of attack and needs to be sure to keep good pad level and generate power from his lower body to help him hold his ground.


He is a solid tackler. Pursues to the ball and displays solid straight-line speed, but needs to be sure to take good angles. As a pass rusher he will flash the ability to be active with his hands. Needs to keep developing and expanding his pass rush arsenal, but displays that he understands that he can't just try and run through or around blockers. Tammaro needs to keep developing his frame and also working on his game, but the kid shows some upside and plays hard and could develop into a solid college defensive end. A move to linebacker could also be a possibility, but end is likely his better fit especially in the long run.