When Clifford Furnas first took the reigns as UB's Chancellor he set to the task of upgrading the athletics program of the still private university. Furnas had experienced life as a collegiate as athlete Big10 track star, and Olympic Athlete, that experience guided his attempt to grow UB athletics.

The first part of his five year plan involved bringing Richard Offenhamer on as UB's new football coach. Offenhamer, who was born in Buffalo, attended Bennett High School and went on to play football and baseball for Colgate. After his Colgate career was over he returned to the Buffalo area to teach and coach at Kenmore East High school (1936-1947). His performance as the coach at Ken-East earned him a job coaching the freshman football squad at Colgate where he stayed for eight years until Buffalo offered him a head coaching job. 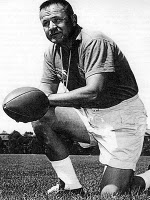 A player would stand in a circle, surrounded by teammates in two point stance. Offenhamer would call a name and that player would rush the man in the center. After the player was hit, and after he delivered a hit the Coach would then call another name. This drill would be repeated sometimes more than a dozen times.

His first year mark of 4-4-1 was nothing short of miraculous for a team that had won only four games in its previous three seasons. After a home opener which turned into drubbing at the hands of Cortland UB would be competitive in every game on their schedule. His 1955 Squad was bolstered by Frank Woidzik who went on to be drafted by the Rams in the 4th round several years later.

He would follow 1955 up with UBs first winning season in a half decade. He would tally five wins in both 1956 (5-3) and 1957 (5-4). Two straight winning seasons was success that the program had not known for some years, but what came next was the defining season of UB's pre-modern era. If not for the recent success of UB many fans would be unaware of the now famous 1958 squad.

In 1958 UB started its season with a stunning victory on the road at Harvard, a win so big that the team instantly began to become big news in Buffalo:

"Blacks weren’t included in the paper at all for any reason, yet we were on the front page. When we were coming back from Harvard, the pilot told us that there were a couple thousand students waiting for us at the airport. It was great support." -- Willie Evans

The 58 squad was full of scholarship seniors, something that UB had never before been able to cobble together. That team tore through their schedule, dropping only one game to Wayne State Baldwin Wallace on home coming day, (per Ken Born's correction). Their 8-1 season was enough to capture the Lambert Cup, given to the best small college in the east. 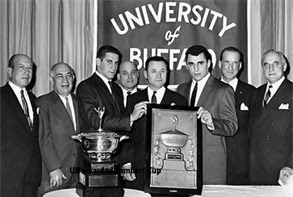 The team was extended an invitation to the Tangerine Bowl, the declined the invitation due to the Orlando High School district's policy about White and African American players not sharing the field.

UB would finish second in the Lambert Cups standings in 1959. The following year UB would move up to the "University Division" of college football. Despite the move UB stayed competitive, but there was an adjustment period as the school would post back to back losing seasons.

Despite the difficult team adjustment many individuals excelled during the 60's. In 1961 UB Quarterback John Stofa smashed school records and in doing so became an All American and moved on to play professionally. After a very brief stint in Pittsburgh where he was not able to get onto the roster Stofa was picked up in the 1966 AFL expansion draft by the Miami Dolphins. He opened the 67 season as the starter but a fractured his fibula during his first quarter of play. He was dealt to the Bengals in 1968 becoming that franchises first player, but after one season we was dealt back to Miami spending two more seasons with the Dolphins as a backup before retiring.

Another Bull to make a name for himself in the early 60's was UB defensive lineman Gerry Philbin. Philbin, arguably the best player in UB history, made the All American team in 1963 and was later drafted by the New York Jets.

He played for the Jets from 1964-1972, three times he was selected to the all AFL team. In 1968 Philbin put up a monster 14.5 sacks (in 14 games). It was Philbin who anchored the Jets line that held the Colts to just seven points during Super Bowl three.

Offenhamer stepped down in 1965 to return to Kenmore East where he resumed his duties as an English teacher. He was offered, and declined, a front office position with the Jets staying on at Kenmore more east until the 1970's.