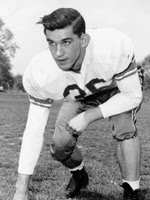 After Richard Offenhamer stepped down Doc Urich (left) took over the program. Urich Played football for Miami of Ohio during the late 40's and early 50's. He was an all MAC athlete who captained the Red Skins (Miami did not change the name until 1997) to a MAC championship during his senior season.

As a player Urich played under Sid Gillman, George Blackburn and Woody Hayes and after graduating became an assistant to Ara Parseghian until 1966 when he would start his head coaching career in Buffalo.

Urich continued Buffalo's respectable records through his three year tenure. During his first season the Bulls defeated Delaware, Villinova, and Kent on their way to a 5-5 season. Close losses to Boston College and Cornell kept were among the games that cost UB a winning season. Despite the somewhat luke warm season UB did produce an All American and an ECAC All star player:

Gerald Lafountain was named an AP all American, A cause helped by the defensive ends 90 yard interception return against Delaware: 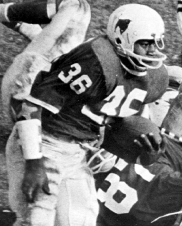 Leland Jones was tagged as an All Star by the ECAC, in 1966. That season he set a UB Rushing record  for touchdowns (16) that stood until James Starks matched it in 2008 (His career record of 29 would stand until starks shattered it Jones also broke Willie Evans mark for career rushing yards (1,759) while that mark would be broken by O.D. Underwood in the 1980's it would stand as the division one record until, again, James Starks, would break it (this time in 2007).

His 1966 mark of sixteen touchdowns is still the best season a UB running back has had when you account for the fact that teams only played ten games during the 60's and Starks played in 14 during the 2008 season.

Urich followed up his initial season at UB with back to back winning campaigns of 6-4 in 1967 and 7-3 in 1968.  After three years and a 17-11 record Urich, perhaps seeing the handwriting on the wall, left Buffalo and went on to coach at Northern Illinois who was starting up their own division one program. At NIU he would not find the success he had at UB and lasted just two seasons going 6-14. One of those wins came in 1970 when the Huskies would end UB's season with a 43-21 drubbing. As it turns out that game would be the last played by UB for seven years.

Bob Deming was picked up in 1969 to take over the program and, initially, did very well continuing the momentum that UB was building up but the SUNY culture, the atmosphere on college campuses nationwide, and the expanding financial requirements of football created a nearly impossible situation for the Colgate graduate.

Culturally a good number of the staff and student body felt that in order for SUNY Buffalo to become an elite institution that the resources being spent on sports would have to be diverted elsewhere. Football was also seen by many in the student body as an 'establishment' activity in a very anti-establishment time.

In 1969 the UB student body voted to cut the mandatory athletic fee of 26$ per year, this left the football program on life support. The final nail in the coffin came on what could have been a marquee moment for UB. Their first home game televised on a major network provided what would be the event needed by those who wanted to end football. In 1970, ABC-TV regionally televised a 16-0 UB victory over Holy Cross at Rotary Field in the only game in UB history to be broadcast from Buffalo by a major network.

In the run up to the game, largely because of the national guard shootings at Kent, students prepared for a  "moratorium," which consisted of a a march through Niagara Square, more protesting at Rotary Field.. The protesters were intent on making themselves seen and heard all across the United States. Because the game would also showcase a halftime show, featuring the UB "Pride of the East" marching band protesters decided that the game was the perfect venue. 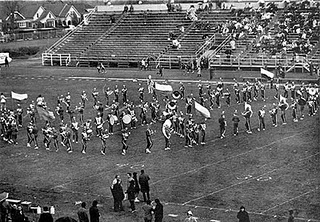 While putting on an approved show at halftime which included field formations of peace signs and other anti war aspects a group of protesters realized that ABC had turned its cameras away from the field and toward main street. The irate students charged the field after the show was over are tore down a "Buffalo Welcomes ABC" sign and delaying the second half of the game. Later some protesters sarcastically lamented they had not come to the game armed, but given the campus riots in 1969 it's not a statement that was taken lightly by the administration.

Coach Deming had already doing everything he could do to contend with budget cuts:

Toward the end, with the handwriting plain on the bursar's wall, Buffalo Coach Bob Deming was fighting to save his program by buying at a discount from a sporting goods firm that was going out of business. He even changed to a cheaper type of laundry marker. -- Pat Ryan, ESPN 2/1/71

The year after the budget cuts (69-70) the program had received more than seventy thousand dollars in donations but after the halftime incident those donations completely dried up and University President Peter F. Regan III, already up to his eyebrows in student unrest was not willing to risk more by extending more financial support to the program. So in January of 1970 UB announced that football would no longer be carried as a sport by the athletics department.

UB Joined a host of schools who dropped their division one programs during this period (This was a time when schools like LSU and Notre Dame were losing money) but few of them had had the recent success, or the future potential, of the university. North Campus was taking shape, the school was growing, and Buffalo was at the time still on of the top ten markets in the nation. It would take seven years for the university to restart football and another 30 until UB would again play division one.