Its time for a new feature on Bull Run... So often a columnist gets so desperate for attention that their loud, obtuse, and ridiculous cries must be recognized. 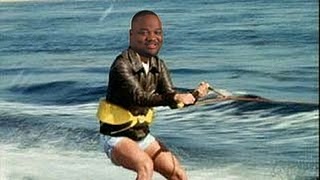 The first ever Bull Run shark Jumping trophy goes to Jason Whitlock. Whitlock's column is often 'edgy' on issues of race, sometimes he is spot on and sometimes a bit off but this weeks column was so epically off base that it screams for recognition (or Prozac).

Like any good shark jump he starts with a good premise, that the SEC coaches complaints about NFL agents are at best ignorant and at worst deceptive and the the sports media has some fault in the big money culture of college football. One think you have to love about Whitlock is that he does not beat around the bush... When he decides its time to jump a shark he won't even bother with a warm up lap.

the rule book supporting the bogus concept of "amateur athletics" is akin to the laws that supported Jim Crow, denied women suffrage and upheld slavery.

Forget all those things, even if we are only talking about the NFL bound BCS stars they are still young men and women with a chance for a free education that they would not otherwise get. They also benefit from four years of college ball helps them develop the skills needed to break through at the next level. To compare these guys to slaves is a disservice to both the people who day in and day out work in athletic departments across the country and, oh yea, the people who actually suffered under Jim Crow.

Reggie Bush had a chance for a free education at one of the elite institutions of learning in the United States. The room, board, and tuition that he did not have to pay was well in excess forty thousand dollars a year. In four years Reggie Bush was compensated with more than two hundred thousand dollars, national television exposure, and athletic training at some of the best facilities in the nation. His name is not Kunta Kinte, its Reggie Bush!

Then he decided he would take some shots at the media:

"The media are slave-catchers, mindless mercenaries crucifying child athletes for following the financial lead of their overseer coaches such as Pete Carroll, Lane Kiffin and Nick Saban."

Really, do you think taking money from boosters was Carroll's idea? There is corruption and way too much money around BCS football but that does not absolve kids old enough to go to war and vote from not following pretty clear rules.

And lets not ignore the fact that Carroll and Kiffin have been crucified in the media, the USC fiasco will always hang over their head. I for one think every game from that period should be vacated but its not like Kiffin, Carroll, or Bush are being financially punished, they will; all go on to earn money in their current endeavors.

As to the medias role; It seems to be rather uncouth to call out the media as mindless mercenaries when you're in the middle of a three alarm "look at me" tantrum aimed mostly at getting attention for yourself and trying to lay the blame for Bush's actions solely at the feet of someone else.

The media are going to chop his (Bush's) Heisman Trophy off, drag him back to USC’s plantation and let new athletic director Pat Haden lash his legacy in front of Chicken George, Fiddler and Kizzy.

Reggie Bushes Legacy was tainted by the actions of Reggie Bush, he could have played anywhere he wanted but he decided to go to USC. He then could have not taken money and just played. Do you think Carroll would have called him into the office to complain he was staying clean? These coaches are under as much pressure as the players to produce and Carroll should take flack for 'lack of institution controll', so should USC and a two year Bowl ban has accomplished that.

The slavery imagery, no matter who he ripped it off of, is what makes him jump the shark.  The underlying premise that some players have very tempting fruit dangled before them, that there is too much money, and the the media often ignores the inconvenient truths of college athletics is there but everyone, even Bush, is as fault.