Buffalo was a team who time and time again snatched victory from jaws of defeat in 2008. In 2009 defeat finally clamped down on UB and held on with a vengeance. Last years team seemed cursed before the season even started.

First they lost James Starks, a pre season All MAC selection and the target of several award watch lists. When Starks went down the entire weight of the offense fell on Zach Maynard and Naaman Roosevelt. While the running game was taking weeks to develop any kind of punch Maynard's play was characterized by a complete lack of consistency. The net result was a slow start for the Bulls including a drubbing at the hands of Temple.

The Losses did not just pile up during the season, shortly after the season was over UB lost Turner Gill to Kansas, then they lost Roosevelt, Hamlin, and Rack (90% of their receiving work) to graduation. Finally and they lost several players to the inevitable culture change that goes along with bringing in a new coaching staff.

The unit most hurt by the losses was the receiving corps.

UB's turnover this year takes away players that accounted for 75% of its receptions, 80% of its receiving yards, and 85% of their touchdown receptions in 2009. Combine this with losing over 90% of it's passing yards and this year starts to look more and more like a rebuilding season. In terms of Skill position the only game tested offensive depth UB has right now is at half back where Nduka, Thermilus, and Gill are all pretty solid.

UB was supposed to have a decent season in 2009, they could have contended for east. Those expectations dropped off a bit when Starks went out before the season started but UB still had the tools to win their fair share of games. What kept the Bulls from playing in December was not the talent of the team but their discipline and play calling that, at times, looked like a football version of assisted suicide.

2009 Exposed Turner Gill's most glaring weakness as a coach, he is too timid with the lead. A 'safe offense' and a 'prevent mentality' kept UB from playing in a bowl game.The common theme in these losses was an unusually high number of three and out series in the second half (or series that had just one first down) and a huge number of converted third downs by UB's opponents. The performance by the defense is somewhat forgivable as they were often pinned deep and with little to no rest after an offensive three and out (or a turnover) but their lack of pressure in the backfield did not help them hold up.

US was not helped in these contest by their special teams who returned poorly, covered returns poorly, and kicked pretty inconsistently.

Despite a very mediocre 5-7 season Turner Gill was quickly snatched up by Kansas after Mark Mangino went off his meds. This left Warde Manual looking to replace his head coach for the second time in four years. Manual snatched up Jeff Quinn who kept together most of the UB recruiting class and brought in a different level of intensity to the locker room.

Quinn's demeanor and, more likely, Keenan Allen's massive coat tails lured Quarterback Zach Maynard to UCLA. Other players left when it became apparent that they would not fit the new system (Sizemore) or when they did not land the roster spot they had anticipated (Willis, Sparks).

Losing Maynard may be a short term pain with some real long term gain. Maynard showed no consistent improvement in his decision making processes so there was a real question as to weather or not he would have earned the starting job this season. His backup last year looked very good against Ohio when Maynard was suspended for the first quarter for 'off the field issues'.

While he does not possess Mayanrd's flat out speed and arm strength Davis did show amazing touch and pocket presence versus the Bobcats. Some things UB badly missed during their close losses.

Quinn's squad gets something of a warm up round versus Rhode Island (who will be stepping down to the NEC after this season). They better make the most of that game because their next three games are the most difficult part of their schedule (NIU and Temple back to back are pretty close second). Aside from the out of conference slate and games against the favorites to win the east and west divisions UB's schedule seems built for a rebuilding team.


For the first time in several years UB has a very favorable cross divisional draw with three teams from the west, two of which are BSU and EMU. Swapping out Kent for a road game in DeKalb is arguably the most difficult divisional game the Bulls will face but aside from Temple (and maybe Ohio) every other team on the slate is one that UB has a shot at.

UB should start this year with a solid running game, something the team greatly missed last season when they took several weeks to find their footing. When all was said and done UB had three solid backs who are returning this season.


The only question for the Bulls ground game will be the durability of Ike Nduka, when he was healthy he was nearly unstoppable last season. Thermilus got off to a slow start last season but grew into his role as the year wore on. Jeffvon Gill did not see action until most of the UB running backs were injured but in his time he showed why coach Gill was so high on him. UB also has James Potts coming on board. Potts turned down multiple offers from BigTen and SEC teams (not to mention Big East, and Conference USA) to come play at UB.

The receiving corps is likely going to be led by Terrell Jackson, the only receiver left from 2009 who factored in the games. The other likely veterans who will factor in are Ed Young and Marcus Rivers. Last season's body of work does not bode well for this unit but they have made impressive strides throughout the spring. Rivers has a huge upside if his quality of play improves, the 6'4 junior is perhaps the fastest man on the roster.

The entire unit looked solid in the spring game, Including Fred Lee and Alex Neutz (both red shirt freshman) but there did seem to be some noticeable miss-communications between the receivers and the quarterbacks which will hopefully get worked out this summer.

On the defensive side of the ball UB will be led by Davonte Shannon, one of the best defensive backs in the conference and easily the best ever to play for UB. Shannon leads a solid secondary which may spend 2010 the same way they spent 2009, making up for a lack of pressure from the front 4. Shannon and the secondary will benefit from the more aggressive attitude Coach Inge brings to the defense, there are a lot of hard hitters in the UB secondary who had previously played a soft set against opposing receivers.

Losing Mike Newton, who is still holding tough with the Colts, leaves a leadership gap with the front seven but talent wise the unit is still in pretty solid shape. The big worry at linebacker is going to be depth, a unit which started spring ball as deep as any on the team took two huge losses when Darius Willis left and Colpoys was injured.

The nightmare season happens if whoever wins the battle for Quarterback does not get on the same page as his receivers and the running games takes weeks to get it together. In that case UB goes into conference play 1-3, drops four or five conference games and finished 4-8.

Because UB has new receivers, a new Quarterback, a new Coaching Staff and a new Philosophy things could get pretty ugly this season. Taking off my blue tinted glasses (and sticking with the despair theme of my countdown posters) leaves me with only one choice for Buffalo. 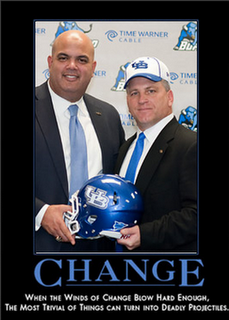