Last season Bowling green exceeded all expectations and ran their way through to the Humanitarian Bowl. Many thought that the Falcons offensive players were not ready for the complicated offensive scheme that new head coach David Clawson was bound to implement.

The Falcons, hampered by an opening schedule that featured four Bowl bound teams struggled out of the gates but ran the end of their season strong enough to finish 7-5 (6-1 over their last seven games).

The not so secret path to success for Bowling green rested on the arm of Tyler Sheehan and in the hands of Freddie Barns. Barns set the all time NCAA record for receptions in a season (155) and Sheehan passed for more than 4,000 yards as the Falcons scored more than 30 points on eight different occasions. Both of those players are gone now and Coach Clawson will have to see if he can make the offense work with a whole new set of skill players.

If any team in the MAC has a history of handling transition well it's Bowling Green. The Falcons have just two losing seasons in the past decade, something only matched by Northern Illinois.

MAC Losing Seasons 2000-2009
Clawson walked into a great situation at Bowling Green, the previous coach was more a victim of his mouth than of poor coaching (though Bowling Green fans might disagree a bit). Because of this he had a loaded and talented veteran unit. His true testing as a head coach is going to be the 2010 season.

The Falcons open up with a really unpleasant set of OOC games with jut one of their first four at home before jumping into MAC play. Troy who is going to be looking for revenge, Tulsa who is always tough, and Michigan are all games I expect the falcons to struggle in. Marshall may be a winnable game, at home, as Bowling Green will have had two weeks to get their new starters some reps.

After Buffalo the Falcons hit their money games. They draw the best two team in the division, back to back, on the road. BJ Fischer from Falcon Blog pegs these as the make or break games for Bowling Green:

Well, I can narrow it to two...we play OU and Temple on the road, back to back.  If we're going to have a shot at competing for the division, we're going to need to win one of those two, both of which are likely to be very tough contests. -- BJ Fischer of Falcon Blog

The only consistent weakness the Falcons had in 2009 was their defense, especially their defense against the run. Their offensive running game may have seemed weak but when you can through 150+ passes to Freddie barns and there is nothing a MAC defense can do to stop you why run the ball? This year things may even be worse on the ground as the Falcons are more decimated defensively than they are on offense.

"While everyone is looking at the loss of our offensive players, the defense also lost a ton of players, particularly at LB and in the defensive backfield.  If you want to know my biggest concern, it is that we will get lit up on defense, and then be forced to throw the ball with a young QB.  We do have some talented players on defense (at least on paper), and but they are young and/or untested." -- BJ Fischer

The new linebackers will have help up front from Senior ends Angelo Magnone and Darius Smith. Magnone was huge for Bowling Green last season and Smith was as solid a role player as a coach could hope for, notching more than 35 tackles as backup end. The entire Defensive line returns but those two will be the key as teams will look to go outside on a back seven that lost six starters.

If the front four can't carry the defense it's going to be a very long year for Bowling Green. Last season their terrible running defense was somewhat ameliorated by a respectable passing defense, but this year there is probably not enough experience coming back for the unit to get a good jump out of the gates so they are going to need the line to force opposing Quarterbacks into some questionable decisions.

Many publications have not focused on what the Falcons will have to overcome on defense, mainly because of this they are losing four thousand yards of passing and more than 200 receptions due to graduation. Several other teams in the MAC are losing the bulk of their offense but for the most part those teams have a half way established running game. While having a year of the offense under their wings might help a bit there are going to be real problems even approaching the kind of success that Bowling Green had last season

The Dave Clawson offense will work without Freddie Barnes.  It certainly worked at Richmond and Fordham without him, and developed some NFL talent along the way.  Now, whether BG will have the players to make the offense work this year is more of an open question.  With a new QB, it is always hard to tell where you will be.  I do think we have some talented players at QB, but their first year is often rough.  We also have some holes at WR and on the O-line, but we have seasoned players ready to step in and the potential for fall off is not that great. -- BJ Fischer

Chances are that Matt Schilz or Kellen Pagel will be trying to replace Tyler Sheehan who quietly put together a very impressive career at Bowling Green. All of the potential starters (you might have to put Caleb Watkins on the list) are very green so the upside is when the painful adjustment period is over Bowling Green fans might be looking at a solid four year starter.

Whoever wins the job will be looking at a corps of receivers led by Adrian Hodges, but its going to be Willie Geter that makes or breaks the passing game (at least early in the season). Geter is a very capable receiver out of the backfield so he will called on not only to anchor the running game but to help fill a 155 reception hole left by Barnes. The Receivers at Bowling Green have potential but they will not be able to replace Barns this season.

As I mentioned above, Geter may be the keystone of the offense. There is room in Clawson's scheme for a strong ground game but giving up 30 points a game last year, and having a freakishly reliable passing game, kept the Falcons from really giving it a go. This season the line should be at least on par with last seasons unit and they do have a talented core of young running backs who will try to balance out the offense.

Well, we certainly need it to.  A stronger running game will be necessary to take the pressure off of our new QB and give him the opportunity to make higher percentage plays.  Whether this happens or not remains to be seen.  Willie Geter is back at RB and has some strong young backups, I think the real challenge will be whether the line can open holes. -- BJ Fischer

Bowling Greens dream season sees them go 2-2 out of conference by beating Marshall and either Tulsa or Troy, beat their other middle of the pack teams (Buffalo, WMU, Toledo), the games they should win (Miami) and take one from Kent, Ohio, or Temple. Seven wins gets Clawson to a boal game for the second time.

With road games @Troy, Tulsa and UM, and a tough home game against Marshall, this team will probably struggle to be .500.  I would think 7 wins would make a very successful year. -- BJ Fischer

The nightmare season happens if the front four cant run cover for the inexperienced linebackers and defensive backs and if the OL can't punch open enough holes for Geter to provide a real threat on the ground. The Falcons would likely drop three (or four) of their opening games, lose to the better teams in the east, beat Miami, and split with the middle of the pack teams for a four win year.

Because they played in easily the most entertaining Bowl game, and because they actually won the game my despair poster for Bowling Green hearkens back to the Humanitarian Bowl. 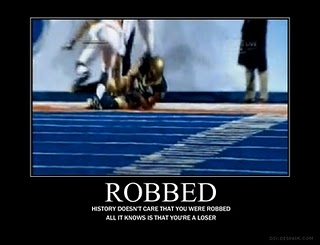