For the past several years every Central Michigan preseason preview has begun with glowing reviews of the previous season and predictions that the Chips will compete for the conference and go bowling. This year Chips fans will have to settle for one out of two. Central Michigan's losses this season make dominating the conference very unlikely, but hey lets talk about last season!

Dan Lafevour ended his run at Central Michigan by snapping the conferences dreadful skid in Bowl games, so we all owe them a little thank you for that. LaFevours four thousand plus yards does not alone capture what made him so great, the GMAC bowl and his performance down the line in that game was the best way to sum up his career.

The other man responsible for that win could have been the star to bridge the gap between the 'old chips' and the 'new chips' but Brown won't be delivering any more fourth quarter kick off returns for CMU, instead he left early and was drafted by Pittsburgh.

Finally Butch Jones, who several years ago took over an already well developed Central Michigan team and did nothing to screw it up (probably the same thing Cincinnati is hoping for), made his exit. Jones getting called up to bat cleanup for, again, for Brian Kelly means CMU is offensively entering a whole new world


During CMU's coaching hunt Kyle Warber at "Fire Up Chips" did a great piece about the decline of MAC football powers. Using Miami as a case study he went through how a team can go from several amazing years to being a cellar dweller. This year CMU is going to have to weather two of the main obstacles continuing a dynasty. The first is replacing a quarterback, the second is replacing their head coach. In addition to this they are losing the most dynamic offensive weapon, out side of LaFevour, that the MAC has seen in some time. I asked Kyle to break down just how big each loss was and why:
As Kyle point's out the success Jones had at CMU is based both on the talent, and scheme that he inherited, I think the Chips are making something of a mistake by bringing in a coach set on implementing a pro set offense. Jones may not have been as solid a recruiter as Kelly but he was pulling in guys that fit his/kelly's offensive scheme. Enos is already engendering warm and fuzzy feeling from folks around the CMU program and Kyle Warber thinks that he will be careful in changing up the systems.

Coach Enos says all the right things and is the kind of guy you would like to have as your next door neighbor. It just remains to be seen that if his charm and charisma will transfer into wins on the football field. College football is littered with the corpses of "nice guy" coaches, while it seems the real ornery bastards like Nick Saban, Urban Meyer, and Bear Bryant get the best results. And don't give me this crap about Pete Carol being a nice guy coach and all the wins he had at Southern Cal. Pete's Dragon could have won all those games based on the talent they had at USC.

Coach Enos has avoided describing his offense by referring to it as "balanced" which results in every Central Michigan fan imagining their favorite football plays of all time and assuming that's what he is going to run at CMU.  A "balanced offense" is, in reality, a non-nonsensical statement because all offenses at the D-1 level are balanced unless of course you have a player so talented like Barry Sanders at Oklahoma State, where the other team knows he will get the ball and still cannot stop him.

But I DO NOTt think Enos is a rigid ideologue -- a guy who won't adapt his playbook to the players we have --  and I think he going to do what it takes to win games rather than re-making the team over in his own image.  - Kyle Warber, Fire Up Chips

The good news for CMU is that they should win two of their first four games if they have any pulse at all, the bad news is their cross conference draw includes Temple and three of their four out of conference games are against pretty respectable programs. Putting aside their divisional games they are looking at a 2-4 record, their margin of error this year is razor thin if they want to continue their bowl streak. Kyle thinks that the extremes of the first two games will tell the world allot about the post LeFevour Chips:

Hampton on September 2nd. Sure they may be an FCS school, but after a Spring Game that essentially finished in a 0 - 0 tie everybody in CMU land is girding their loins and hoping that game was just an abnormality. Nobody is taking that game for granted and everybody wants to see if the new offense looks like and judge for themselves the talents of our new coach.

After that, CMU has Temple University, the class of the MAC this year and the pre-season favorites to win everything. I think everybody with any interest in MAC football will be tuning into that game, and if CMU gets destroyed, it could by like psychological "agent orange" eating away at CMU's self confidence.


While all eyes were on Lefevour last season the untold story was the CMU defense, a unit which only gave up more than 30 points three times, and gave up more than 21 points just five times. As far as MAC defenses go that's pretty damn good. The offense was the reason the CMU won, the defense was the reason that they won with ease. This years squad is only going to be successful if the defense performs as well, if not better, than last years team.

Linebacker Nick Bellore is not only the leader of the entire defense, but the captain of the entire team in my opinion. If their are some asses that need to be kicked in the locker room at half time I am pretty sure he will be the guy doing the kicking, and not coach Enos. -- Kyle Warber

Bellore is carrying the weight of the defense, despite being a part of a very solid line backing unit Bellore probably the best linebacker in the conference so it's going to be up to him to lead the unit.


The CMU line backers have the support in front of them that the need to be effective in pass coverage, at least up the middle the ends might be a different story. The front seven need to be solid because if the Chips are going to struggle anywhere on defense, which may not be the case, it's going to be in the defensive backfield. Bradley will have to shake the dust off after missing last season to take over a unit which will have at least two new starters this season (one corner back and one safety).

Ryan Radcliffe has the biggest shoes to fill in the MAC, and he has to do it with an offense that will be changing up personnel, and probably the scheme. The offensive line is returning four starters but they are going to have to move from a spread to pro set (what UB is going through in reverse) which could take a year of adjustment to figure out. On the offensive side the biggest hit this spring was the departure of Bryan Schroeder, there is some depth left behind him but he was easily the favorite to be CMU's go to guy in any kind of a run heavy offense.

So Central Michigan loses their starting QB, WR, RB, and has to retrain their offensive line, did I miss anything? If you're a true frehman offensive skill player and you want time Central is the team you should have signed with last season

I am really high on some of the players on offense like wide receiver Deon Butler (6-foot-3) from Inkster, MI, running back Ben Brown from Romeo Michigan, and tight end Caleb Southworth (6-foot-5) out of Piketon, Ohio. I could see them having a roll on the team this season.  -- Kyle Warber

I've seen a lot of CMU fans talking up a ten win season, believing that their team is going to challenge for the west. While they have a very impressive defense (could be the class of the MAC) their offense is just not going to be able to carry their end of the deal. The defense alone could carry the team to a bowl game but it's wont be until 2011, at least, until CMU dominates the conference again. Kyle, after taking off his Maroon tinted glasses sees the writing on the wall.

Pure, cold, Vulcan logic says that CMU is on collision course for a 6 - 6 season based on how prior MAC teams have done after losing an NFL caliber QB.

But It will all come down to new QB Ryan Radcliff and if he can emerge from his shell we could finish 12 - 2 again. -- Kyle Warber

CMU's dream season sees Enos not mess with the offense too much this year. A solid offensive line and talented, if inexperienced players, can then be a middling offensive unit in the MAC. A middleing offense is all the Chips need to field this year, their defense can carry a 6th ranked offense. They win the games they should and catch Toledo napping in the season finale to notch 7 wins and keep their bowl streak alive.

The nightmare happens when CMU goes into full fledged Dan Lefevour withdraw and the shakes they get move their offense towards the bottom of the conference. The Defense can keep things close but with no punch they drop the games against other teams in the middle of the pack (WMU and or Bowling Green), they lose three out of conference and limp into a four or five win season.

Because I have seen more people blatantly ignore an offense that has to do more rebuilding than nearly any in the MAC and call CMU a contender for the West, there demotivational poster focuses on reality. 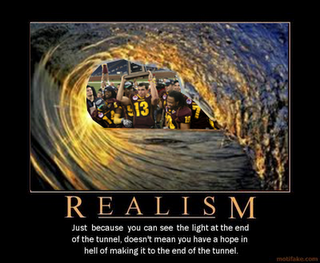