Share All sharing options for: Know a foe: #1 Rhode Island

Side note: I should not have looked up previous FCS over FBS win's, somehow I got new hampshire stuck in my head... I had to fix things a bit after I published this 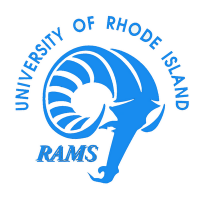 I am generally not a fan of scheduling FCS teams, some of you know this so I would be remiss if I did not admit I'm being something of a hypocrite when I say "I am thrilled we open up the season against a middling FCS team". This is not to say that a team like UB breaking in a new coach, quarterback, receivers should take any opponent lightly, especially in week one, but it is a relief that Davis (or whoever starts) will be facing Rhode Island and not Baylor right off the bat.

Every once and a while an FCS team catches an FBS team napping, sometimes it's because the FCS team is that good (Villinova over Temple, App State over Michigan), sometimes it's because the FBS team overlooks their foe and just under performs (New Hampshire over Ball State). If Rhode Island is in this game past the midway point of Quarter two it will be because UB overlooked them.

UB has a recent history of struggle against FCS teams, but most of that ended when Warde Manuel came on board, the Bulls dropped the cupcake games in favor of money games against Auburn, Penn State, and Wisconsin. With the program now competitive the cupcakes are back and UB had their first sampling in a long time last season when they handled Gardner Webb.

This will be the fourth meeting between the schools

Rhode Island's recent history against FBS teams does not provide them with too much hope, while they are playing teams like UConn, Boston College which are typically much stronger teams than UB has been the drubbings taken by the Rams indicate that most FBS level teams should be able to have their way with the program.

The Rhode Island football program is in so much trouble that they are 'downgrading' their program. This will be the Ram's last season as a member of CAA for the NEC. Some of tihs is about politics (CAA is shifting south, and hard) and some of this has to do with money. While the NEC is currently a 34 scholarship league they are moving towards 40 so the Rams may some day have a crack at the FCS playoffs but even in CAA they have been a cellar dweller for this entire decade.

Who Calls the shots:

Coach Joe Trainer (honestly how cool is it to be a coach with the last name trainer, if only Mr and Mrs. Trainer had had the fore sight to name him Champ or Cross) limped through his first season as a head Coach, anywhere, in 2009. Before that he had floated around as a positions coach and/or defensive coordinator among several FCS teams (and Temple).

Trainer was also very briefly on the staff at Bowling Green in late 2008. After Clauson brought him on board he was then offered the head coaching job.

Trainer is 1-10 all time as a coach, with his sole victory being the season/home opener against a relatively respectable Fordham team.

One of the reasons that there was pressure on the rams to move away from the CAA is because they just have not been able to field a solid team, and last year was no exception. The Rams are near the bottom of most categories (offensive and defensive) but a few guys stand out. 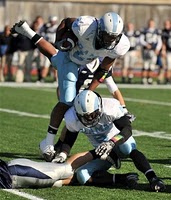 Jarrod Williams led his team, and was to 10 in the conference for interceptions, he is also a dynamic return man, something that UB has struggled with in recent years.

Their Quarterback Chris Paul-Etienne is going to be one of the better CAA QB's this season, he threw 14 TD's against only 7 picks last season (threw for seventeen hundred yards).

I have to be honest breaking in a new quarterback and offense against someone who was top 7 in his conference (CAA or not) in interceptions should give UB fans some pause. I'm also not sold on our special teams, last season UB was awful in coverage and Williams is dangerous.

Fortunately the Rams likely wont have too much of a passing offense and their ground game is, for all intensive purposes, non existent so even if we do cough the ball up once or, shudder, more times our defensive secondary should be able to hold them.

Coach Quinn and company start their year, as any game of Mike Tyson's Punch should start, against Glass Joe. While the Ram's special teams might be a bit stronger than good old Joe's the offense and defense is about as potent. This is the game that the players can use to learn what the "A Button" does, how to move from left to right, and still hopefully walk away with a win.

UB wins this game 19/20 times (95% for anyone wondering) which is good because this is the only game on UB's out of conference schedule in which the Bulls even approach "heavy favorite" status. The weather should be nice (at least not cold), there will be a ton of new students on campus, UB has been hitting the airwaves hard and it should be a fun game if you're not rooting for the Rams.

UB's offense is not going to come hard out of the gates, the new skill players may have the jitters and Rhode Island does have a decent defense so expect an early ground game from UB. The Rams may hang tough for a bit but by Halftime UB is up two scores.

In the second half  UB should pull away as Quinn opens up the offense and the depth difference between FBS and FCS teams becomes a factor.

Football is not exactly a big thing at Rhode Island, they are understandably much more excited about their quality basketball program. There is,however, a pretty good Rhody blog which does cover their football team called Running With the Rams. I have a blog Exchange set up with them in the week leading up to the game so I expect soon they may have their thoughts on the Buffalo game.