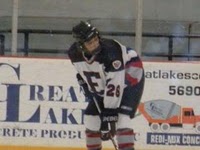 Went has been playing on a very successful ECC hockey program and he has been twice named was just named a NJCAA 1st Team All-American.

"His biggest strength is his nose for the net, When we saw him play at Starpoint and contacted him, we knew he’d be a good player, but you don’t expect a lot from a guy in his first semester. We got a lot from him right away." -- ECC coach Gary Rost

Wendt followed up his junior season (where he finished second in NJCAA scoring nationwide) by adding 12 more assist and leading the nation in 2010-2011.