Was that it? Really?

Share All sharing options for: Was that it? Really? 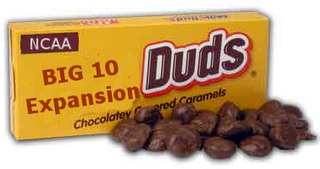 So no PAC 16 then? Rutgers not making a trip to the big ten? The Big East is not falling apart? No SEC raid on the ACC... No 32 team mega conferences? Wow, I got excited for Nebraska to the Big10, Colorado to the PAC10, Boise to the MWC and, maybe, Utah to the PAC10? Are you kidding me?

Well it's often said 'in with a bang out with a whimper' and 2010 Expansion Palooza was exactly that. As it sits right now there are one, maybe two more dominoes to fall in conference expansion and they will, at most, be pretty minor considering people were talking Syracuse and Rutgers to the Big10 and Temple to the ACC/Big East. In the end the BigTeleven became the Big12, The PAC10 is now the PAC11 (or 12) and the Big12 became the Big10. Everything else is very, very minor from a UB fans point of view.

The Big10 proved that their TV money can lure away anyone they want save Texas and the SEC teams (even there I'm not fully convinced the Big10 could not pull away a couple from the SEC). As a conference they had just about everyone lined up at their door trying to get into the clubhouse and they proved, by passing over Missouri for Nebraska, that as much as they like the TV money it alone will not get you in.

At twelve members the conference can sit back and watch Notre Dame's position as an independent get weaker and weaker until the Irish are forced to join a conference. When that day comes they have a list of teams that were practically begging to join who would still be interested.


The Big10 is a winner because they proved that nobody in college football controls their own destiny like the Big10.

For what it's worth the PAC10 move was big news, and its likely not done yet, but the potential for a super PAC16 conference died when Texas and Oklahoma put the rest of the Big12 over a barrel. Expect the PAC10 to pick up one more team. Currently the media big heads are predicting Utah, Air Force, or some other MWC power. The addition of a 12th team from the MWC or even the WAC would give the PAC12 a championship game and even our the divisions but as the Big10 has proved for years you don't need divisions or a championship game the thrive.

The PAC10 is a winner because the Colorado market pickup is huge, and they are a hairs breath away from a conference championship game, in the mist of their flagship program taking a beating they needed this news.

The Mountain West conference made a smart move picking up Boise, while its true they bring nothing but football to the table they are one of the premier football programs in the nation and will be more than a match for anyone who the PAC10 may pick off. If the PAC10 leaves the MWC unmolested than there is a realistic shot that the conference could pick off two more from the WAC (Fresno maybe) to become a 12 member power conference. Picking up Fresno and Nevada may be enough to cancel out some of the weakness at the bottom of the conference and push them into a BCS bid.

The MWC is a winner because Boise is as good as anyone they might lose, so in the end they will come out as good, if not better, than they were before expansion. The conference will be a huge winner if they are left alone by the PAC10

The SEC meanwhile won't be moved to grow by a 16 member Big10 or PAC10. The conference is, and should be, content with its footprint, revenue, and position in the college football world. There is a minor chance that the Big12 might go after Arkansas but right now I suspect nobody wants a piece of the Big12 until things stabilize.

The SEC is a winner because they have not been pushed into a big expansion which could have forced a whole scale review of the BCS. When you are sitting at the top of the pyramid you win when everyone else stays in place and, for the most part, that's what happened.

Stability also benefits the Big East who will continue to trip along as a basketball run conference with eight football members for a while. The Big East is a winner because while they are still at the mercy of the Big10 and Notre Dame not losing a team saves them from an already perceived weak position. Many were getting ready to bury the conference if the Syracuse, Rutgers, Pitt raid happened.

The MAC comes out of this whole mess better than many might think. While the conference as a whole has not picked up any power or prestige it has potentially tripped into a better bowl agreement than they signed up for: The move of Boise may cost the WAC the humanitarian bowl and line the MAC up against some serious power teams in the future:

"When the NCAA reviews the new alignment of the conferences, there will be a lot of discussion about what bowls should be aligned with what conferences and how many of them, I don't know quite how important all these contracts are going to be." -- Humanitarian Bowl executive director Kevin McDonald

It's hard to know if Dr. Jon Steinbrecher had any information, or could just guess, that this could happen but the move to lock down the Humanitarian Bowl now has a huge upside. Imagine instead of playing Utah State, or Idaho that a MAC team will line up across from Air Force, Boise, TCU, or some other team. There is so much power at the top of the MWC that the H-Bowl has to potential to feature a ranked MWC team every year.

In addition to a better bowl game the MAC teams who had an outside shot of moving up to the Big East should it get raided (Temple / Buffalo) are now right back where they were this time last season. Temple is a standby for some bigger conference and Buffalo is a project program with potential but not a lot of facilities or history. When Temple's contract with the MAC is up next season they might not have any better offers, aside from Conference USA, on the table this improves the conferences bargaining position. Mike Breese over at Red and Black Attack seems to think that maybe NIU could be a future target of the Big12, but in reality nobody in the MAC is a target right now.

The MAC is a winner because they may improve their bowl match-ups and the two teams most likely to leave are not going anywhere without a huge shakeup.

Because the SEC is going to pass on expansion the ACC can breath a sigh or relief, they may have lost Florida State or Clemson if the SEC got peckish but their 12 teams are pretty safe right now. The ACC is a push because they won't have to raid the Big East again (or Conference USA) but they are not in a better position than before.

Conference USA also will likely go untouched because the Big East will stay where it is, the last time the Big east needed to grow C-USA was on the menu and if they need to grow again they will be going back for seconds.

The SBC who may have been a target of Conference USA algo get a pass. Right now the SBC is in need of stability while they wait for the moratorium on FCS teams moving up to expire.

If you're anyone but Texas or Oklahoma you just got owned. For KU, K-State, OSU, Iowa State, and Missouri the past month has been a hugely humbling experience. The Big10 does not want you, the SEC does not want you, and The Big East may have taken you if they were desperate.

At the same time Texas now has a certificate of ownership for the entire conference, what was a unwritten truth in May is now all but law. The Big12 is a wholly owned subsidiary of Texas. Having one team call all the shots makes the Big12 the biggest loser.

With the departure of Boise The WAC is on life support, they are now as relevant as the MAC and SBC in the grand scheme of things. With ten remaining Big12 teams fresh off a 'commitment ceremony' its likely that any near term MWC expansion will come at the WAC's expense. The WAC is in the unenviable position of having nobody to grow with but FCS teams.

The WAC is a loser because the only team left to carry their banner, Fresno, is a solid program but they are not Boise. Without Boise the chance of any BCS busters coming out of the conference are slim to none.