After Jim Peele stepped down as the head football Coach the work he had done, and some quality coaching hires would help maintain the strength of the program for several years, but even eventually the program would again fall on hard times.

Frank Clair was Jim Peele's handpicked successor at Buffalo. Clair played his college Ball at Ohio Sate, lettering three times between 1938 and 1940. In 1939 he was one of the keys in the Buckeyes victory over defending Big10 Champion Minnesota, that game propelled OSU to their first Big10 Championship in more than a decade. After his senior season (1940) Clair was selected to play in the Blue Grey All Star Football Classic.

Clair got a shot After college with the Washington Redskins in 1941, but after just one season (2 receptions, 12 yards) he was released.  Several years after his NFL Career Clair went into coaching. Hist first job was in 1946 when he became an an assistant coach to Sid Gilman (Miami of Ohio), the following year he took a job on the staff at Purdue in 1947.

So with just two years of coaching experience Clair took over at UB. UB knew nothing but success under Coach Clair who's two season stint produced a record of 12-4-1. His tenure moved UB to five consecutive winning seasons, aside from Jim Wilson extending that streak to six seasons UB has never had that many winning seasons. 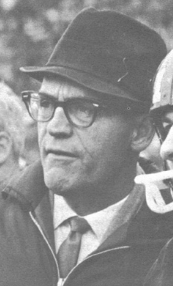 After coaching he served for nine years as the general manager, helping the Rough Riders to win two more cups. The rough riders released Clair in 1978 and have not  won a Grey Cup since.

Clair's proficiency for developing talent earned him the nickname 'The Professor'. The Current stadium for Ottawa was renamed 'Frank Clair Stadium' in 1993.

When Clair left for Toronto he also took with him Bob Leipler (pictured left). The UB lineman  would play several seasons in the CFL. After professional football career Liepler would return to Buffalo took up professional wrestling. Leipler wrestled under the name "Duke Hoffman" until 1976.

Football members of the UB Athletics Hall of fame under Coaches Febel, Wilson, and Clair

After Clair bolted for the CFL James Wilson, who coached in the 1930's would again take the helm of the team. After his early (1930's) career in Buffalo had ended Wilson landed at Canisius where he piled up a record of 28-15-4 over the course of  six seasons. Wilson's success at Canisius led the Golden Griffins to their first, and only Bowl Bid (Great Lakes Bowl in 1948).

Wilson began his second stint at UB by extending the Bulls streak of winning seasons to six games, the longest such streak in UB History.

Coach Wilson would follow up his first season with a 4-4 mark that would be his last as a football coach.

With cutbacks in the athletics budget the UB football program would struggle for several years. Coach Wilson was followed up by Fritz Febel.

Febel was a Purdue product and an NFL alumni (one year as a guard with the Bears in 1935). He had served as an assistant at the university from 1936-1942 and after coaching had landed as an assistant Professor of Health, Fitness, and Physical Education at the UB.

During the 50's all varsity coaches at Buffalo also had to be full time faculty members, and choosing Fable's enabled the university to both keep to that policy without stressing an already tight athletics budget.

Though his Bulls never managed a winning season Febel was one of three UB coaches to leave their mark on Western New York football for decades to come.

"I was lucky to work with Jim Peele and Fritz Febel and with Frank Clair, who introduced a system of coaching that was widely used by the many players who became high school coaches in Western New York-he inspired us." -- Charles E. Dingboom UB Football Alumni and Riverside High School Football Coach.

Febel's squads were vastly outmatched as he posted a three year mark of 4-19-1, making him one of the more unsuccessful coaches in the programs history. During his three year tenure he only bested three teams St. Lawrence (twice), Ohio Northern, Rensselaer.


Starting in 1955 the university would have a leadership change that would usher in one of the best era's of UB football ever. Febel would leave the team but new Chancellor Clifford Furnas and Athletic director Jim Peele would take a struggling program to new heights in the coming years.