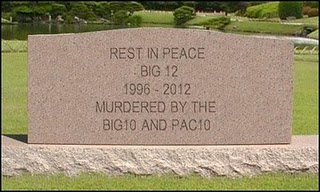 In a way the Big 12 is to thank only itself for this, the conference has become so Texas centered that Nebraska and other north division teams have been slowly getting, financially, left behind. The recent announcements of a Texas based championship game and a 'crap or get off the pot' memo regarding expansion seem to have been the straw that brok tom Osbourne's back.

"It’s just the idea that the conference office moved to Dallas, and now you see the push to have the football (title) game played in Dallas for three years. That gives you a pretty good possibility it may stay there." -- Tom Osbourne

Missouri: There is still an outside shot that the Tigers will get the call, but only if the Big10 is going to 16 teams. Pitt, Syracuse, and Rutgers (among others) are likely in front of Missouri.

Baylor: With Colorado in the PAC-10 Baylor is going to lose a lot of leverage. there was a chance that if the PAC-10 was going to invite Texas that the conference could have been bullies into taking Baylor (much the same way the Big12 was). But right now the Longhorns coat tails are only going to be big enough for A&M and Tech.


So how does all this affect the MAC?
There will be enough left overs (Missouri, Iowa State, Baylor, Kansas, and Kansas State)  from the Big 12 for things to play out one of three ways:
The worst thing the MAC can do at this juncture is sit still, the move to 16 team conferences is now officially underway, if the MAC wants to try to keep up they need to be aggressive with schools like Iowa State, WKU, and perhaps some quality FCS schools looking to move up.