After a terrible 2008 campaign which led to the ouster of Shane Montgromy there was little expectation that the RedHawks would filed an impressive squad in 2009, but the level at which Miami performed, or underperformed, was pretty surprising.
Miami's cause was not helped by a schedule which opened with four of their first six games coming against respectable BCS teams (Counting Boise as a BCS team). To top it off all of these games were either road games or defacto road games (More Cincinnati fans than Miami fans in Oxford and way more Kentucky fans than Miami fans when they played in Cincinnati).

Back in the day Miami would have won, or come close to winning, at least two of these games but the Hawks have fallen so far off their perch that they may linger in the cellar for quite some time.


Miami seemed to be pulling out of it's nose dive in 2007 when they won the MAC East title via tiebreakers over Bowling Green and Buffalo but that was, in economic terms, a false market bottom. In 2008 the hawks tied their 2006 mark with just two wins. This made the 2006-2008 seasons easily the worst Miami had seen since the late 80's and led to the installation of Notre Dame Assistant Mike Haywood as the new RedHawks coach.

Coach Haywood came a hairs breath away from sharing Coach English's fate of a winless first season but Miami caught Toledo in the mist of an epic nose dive (caused by Injury and shoddy defense). The win, and the development of Zac Dysert are highlights of a season that most fans would rather forget.

The real killer for Miami is that while they were never really in contention for the division they sure scared the hell out of some of the better MAC teams like Temple, NIU, Kent. They also stayed way too close for comfort with Northwestern. I really believe that if Coach Haywood starts the season with Dysert Miami wins two, maybe three more games last season.

Miami should show some real improvement this season but given their schedule it's not easy to see how many more wins that translates to.


Miami has a chance to get off to a 1-1 start when they host Eastern Michigan, if Dysert please on par with his final few games last season there is little change that the Eagles will be able to stop him from doing pretty much whatever he wants. After EMU, however, it's hard to see where Miami's next win comes from. Every other team which is realistically beatable (Buffalo, Akron, Bowling green) is a road game.

Miami is returning it's entire offensive line, but is that a really good thing? This is the same line that hung their Quarterback out to dry 59 times last season (That's about five sacks per game for the algebraically challenged). They were, admittedly, a very young unit in 2009 but it's hard to think one year is going to make that big a difference to opposing defenses.

The biggest reason for hope is the way that Zac Dysert developed as the season went one. Dysert posted five of the program’s top 25 passing performances in school history in just nine starts. In addition to a seemingly golden arm Dysert showed great mobility, something that a person standing behind the RedHawks line clearly needed.
Dysert's top five performances from 2009


These Numbers earned Dysert Phil Steele's endorsement as the best MAC quarterback heading into 2010, with the departure of LeFevour, Hiller, and Schmitt it's hard to argue against him being tagged as one of, if not the best signal callers in the conference.

Dysert has the receiving corp to be successful, he will be throwing to Armand Robinson his leading receiver from last season, and Armand Robinson his second leading receiver from last years team. What he does not seem to have is any kind of running game to take the pressure off of him. Without a running game Dysert may still be susceptible to the up and down play that he demonstrated last year.

Jerrell Wedge will lead the Miami back seven, but as a whole it's linebackers and defensive backs will spend too much time cleaning up the mess left by the RedHawk's front four. Until the rather young defensive line cleans up it's act defensive backs like Anthony Kokol will be spending too much time covering the run to make a huge difference in the passing game, if he was freed up to be a pass centered safety he could be one of the better backs in the conference.

Miami's dream season sees their offensive line tighten up, allowing Dysert to beat up on Akron, EMU, Buffalo, and Bowling Green. Throw in one or two upsets against mid tier MAC teams and the RedHawks could land six wins, perhaps a bowl. The nightmare happens if the hawks lines poor play last season is due to more than inexperience. If that's the case Miami beats EMU and maybe shocks one other team on it's schedule going, at best, 2-10.

My demotivational poster for Miami is: 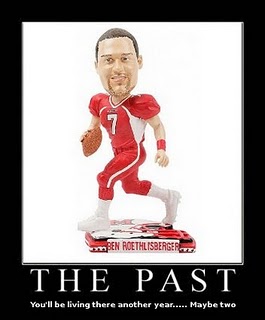