Is there any team in the MAC that had a more disappointing season than Western Michigan? EMU and Miami were both coming off terrible seasons with brand new coaches, Ball State was completely retooling, and Buffalo's losses were pretty severe.

WMU was expected to break the Cubit Cycle; for all his talents as a coach Bill Cubit has coached a program that, for the past four years, has been unable to put together two good, or bad seasons.

WMU was not only expected to Bowl, they were expected to compete for the conference crown. According to Stassen only three out of eighteen preseason publications had the Bronco's lower than second in the west (some of the more notable predictions are below), and only two predicted a standing lower than third. In the interest of full disclosure I did not do much better, last year when I started blogging I had WMU winning ten games and finishing second in the west

The 2009 season gave the world a look at just how much Jamarko Simmons meant to WMU. Along with the loss of Simmons Hiller had to get along without Schneider Julien and Branden Ledbetter, the net effect was a dramatic drop off in Hiller's effectiveness.

Despite some awful play last year by Western Michigan they were only eight minutes away from a bowl game before Ball State went an ruined Tim Hiller's final game. After getting through half their season with only two disappointing losses (Indiana and NIU) the Bronco's seemed like a lock for bowl eligibility after they knocked out Buffalo in overtime. All tat remained in late October was beating two teams out of a pool that included Ball State, EMU, and Kent at the time these teams had a combined 5-18 record ( and the three finished a combined 7-29). Kent took them apart and the Ball State secondary embarrassed Hiller in Kalamazoo.

When Hiller shrugged this season the defense failed to come through. The Bronco's defense was a patchwork of new starters so the struggle was not very surprising but it was the final nail in Western Michigan's coffin. Opponents moved at will against the Bronco's who were near the bottom of the conference in most categories by the time the season ended.
WMU Defensive Yardage Rankings

Still, ironically, the WMU defense played their hearts out in against Ball State.

WMU has one of the more favorable schedules among Western Division teams this year, their cross divisional draw and the layout of their home games leaves the door open for a team that may struggle to surprise a few people this season. Drawing Idaho at home is big, the Vandals long trip could make a 2-2 out of conference finish reasonable.

Their in conference schedule sees a reasonably easy cross division draw, and the team with the most potential (Kent) has to travel to Waldo. In the West division the only thing that could ave gone better is getting CMU or Ball State at home in exchange for EMU. It's not unreasonable to see six wins on this schedule but its hard to see any more than that.

Assuming they go 2-1 against the East and split their out of conference games WMU would need only two of five games to make 500. EMU at home should provide one and they have a punchers chance at Toledo. The road game against Ball State may be the game that makes or breaks their Bowl Chances.

The Defense should be better this year firstly it would be hard to be much worse than 2009 and secondly the secondary and defensive line are stocked this season. Any enthusiasm about the defense might be muted by the loss of  Austin Pritchard, Cody Cielenski and Justin Braska who were all key to what little backfield pressure the unit managed last season but the experience in the secondary and on the line should shine through a little this year. Strong Safety Mario Armstrong was second on the team in tackles, including ten during their season ending loss. He will have to fill the leadership vacuum left by Pritchard.

Offensively things are far more uncertain. Not only did they lose Tim Hiller but they also have to replace Brandon West, the all time NCAA leader in total yards. With West gone both the running game and the return game are going to have a new feature player for the first time in four years.

So who gets the unenviable charge of following Tim Hiller and Brandon West? The smart money says that Alex Carder's talent is going to trump Drew Burdi's experience in the battle for the quarterback position. Coach Cubit has not been shy about who would get the job if he had to make the decision in the days leading up to the spring game..

"Right now, if we had to play a game today, it would be Alex, I’m happy with him. I think he’s really doing a lot of good things as long as he doesn’t blow up on a play and it hurts you. Right now, I’m really happy with him." - Broncos coach Bill Cubit

Carder came out of the spring game looking better than he did going into it, 14 of 18 passing and no big gaffs. So unless he has a terrible August the assumption has to be he gets the job this year.

Aaron Winchester is almost without serious competition in the search for West's replacement. Brian Fields may have an outside shot at winning job, both seemed to impress coach Cubit during Western Michigan's spring ball, but like Carder I think Winchester would really have to struggle in August to not be 'the guy' when the season starts.

Western Michigan's dream season sees Carder come out comfortable and Winchester play well enough to keep the pressure off the passing game. An offense that can manage to not give away games gives the Bronco's take four or five out of six at Waldo and knock down BSU, Akron, and maybe Bowling Green on the road to finish with seven wins, and a Bowl Game. The nightmare happens if

The nightmare happens if the defense does not take advantage of eight returning starters. The Offense, even under the best case scenario, cant carry this team in 2010. The Bronco's fall to all the middle of the pack teams (CMU, BSU, BGSU, and Toledo) as well as Kent and NIU. Throw in the fact that Idaho is no longer a total joke and WMU could be starting at eight or nine losses.

Because the Bill Cubit Roller Coaster continued on last season WMU gets the following motivational poster. 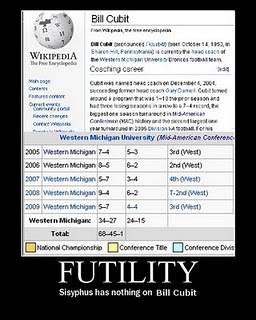