The last time UB played the Cards the Bulls snapped a twelve game winning streak and started an eleven game losing streak that included the MAC Title game, a bowl game, and a loss to an FCS team.

Ball States 2009 season would derail many a college football program. Fortunately for the Cardinals Brady Hoke left the cabinet pretty well stocked before he took off after the MACC. As painful as last season may have been it's doubtful the Card's will find themselves in the mist of so bad a season any time in the next several years..

My only question about Ball State's football hopes lie with head coach Stan Parrish. As a head coach Parrish had some success at Wabash and Marshall, and that success propelled him to Kansas State where he went 2-30-1 in four seasons. His stint at K-State put him into the role of assistant coach for about two decades.

Whats at stake for Parrish, and the Cards, is the momentum that Coach Hoke built. BSU is a middle tier MAC team when it comes to the athletics budget so they need to take advantage of their recent success (2009 aside) to lure recruits and temp alumni into donating.

Over the course of several years BSU slowly, but steadily, went from joke of the West to conference power. Despite a season that could ignite the seats under most head coaches Stan Parrish still seems to have a very safe seat according to Alan at "Over the Pylon" (who was gracious enough to lend me a little insight into BSU's prospects for 2010).

Bull Run: How warm is Stan Parrish's seat and what kind of finish does he need to cool it off a bit?

Over the Pylon: Stan's seat is frigid. No pressure at all for this year, if for no other reason than BSU couldn't afford to buy him out even if it wanted to. And considering the economic constraints, they couldn't really hire many folks with Stan's track record. Wins and losses aside, since his K State days were impossible to succeed for anyone, he was an extremely successful Coordinator at all of his stops and is a championship caliber coach. College, NFL, he has the rings to prove it.


The Cardinals could have won anywhere from zero to six games last season. In four of their losses Ball State was either tied or ahead well into the fourth quarter. The most painful loss may have been against Toledo where the Cardinals took the lead with less than a minute to go only to watch the Rockets drive down the field in less than thirty seconds.

The last second losses could be chalked up, in part,  to a new defensive set and youth on the offensive line. The Pass defense was a particular sore spot for Ball State who could not seem to stop anyone from moving the the air, seemingly at will.


The Cards are heavy on talent this season and a full year of experience running the 4-3, If there is one area almost guaranteed to improve its going to be their defense.

I think the defense will be significantly improved, less to do with specific people, but more to do with experience from the players and having a year under their belts in the new 4-3. Last year was growing pains and bumps in the road because of a schematic shift. It's not like we were without talent. -- Alan, Over the Pylon

Aside from the worst pass defense in the Conference Ball State was plagued with the conferences worst passing offense.

A lot of their troubles started with an inexperienced line and quarterback but Ball state also had their fair share of injury trouble in 2009. Kelly Page is the likely favorite to start this season, but he may have to survive a run from a stable of talented youg quarterbacks waiting for their shot.

He's (Page) the guy. The curious thing about having so much talent at the QB position in Page, Aaron Mershman, and Keith Wenning is that they will challenge each other to perform better. And that's a good thing. -- Alan, Over the Pylon

Page went down with a broken thumb against Bowling Green and never again saw the field last season. In the weeks leading up to his injury he seemed to be getting much more comfortable with the speed of college football. Despite the fact that his opposition in the later weeks (Temple) had far better defenses than the squads he faced early in the year (Army, New Hampshire). Page was more able to make the Passing game of Ball State a threat.

Page will have a lot of pressure taken off by the return of  'Quale' Lewis. Alan at OTP somewhat downplays how important the medical waiver was but no matter how much talent you have in the backfield truly is no substitute for the experience and the leadership that he brings back to the offense.

Bull Run: How much does having Lewis back for a final season mean to the offense? Will the offensive line improve enough to help him?

Over the Pylon: It's big, but not as big as people would think. The BSU RB group is an exceptionally talented group. Having Quale back adds to it, but if it were only Cory Sykes and Eric Williams as the returners, I think we would be fine. The o-line is ultimately the question. And the answer is they won't be as good as the group from 2 years ago, but they'll be better than last. That's the thing about a ton of freshman... each and every year gets better. And the biggest leap is from frosh to sophomore.

BSU is one of several teams that are total wild cards this season (Buffalo, WMU, CMU, Ball State, & Bowling Green). Depending on how things break any of these teams could have a great year or a terrible year. Even if things break the right way for BSU their chances of going bowling are handicapped by two games against FCS teams, meaning they need a seven win season if they want to be in the post season picture.

When it came out that the Cards had two FCS teams scheduled there was a pretty loud grumbling from BSU fans on Ball Stte and MAC message boards (BSUFans, NCAABB's). The argument in favor of the schedule is that such a weak schedule aides rebuilding program.


Putting aside their double helping of cupcakes the Cards have a pretty difficult schedule; two road games against Big10 teams, put them into conference play at 2-2. Instate rival Purdue is the more winnable game but both would be a pretty tall order for any MAC team (Granted NIU did beat Purdue last season).

Bull Run: If you had to pick a win over instate rival Purdue or Power team Iowa which one do you take?

Over The Pylon: Iowa, simply because they are a better national win than Purdue. If this was several years ago with Painter or Brees and Purdue was a Top 20 team, then I would say them. However, I think we'll be competitive against Purdue this year. Call me crazy... but an upset there wouldn't shock me and I won't waste my pick on that one.

The biggest thing the Cards have going for them is the fact they don't face Western Division favorite NIU until the last week of the season, by then a healthy Kelly Page could be one of the conferences better quarterbacks and any remaining 'kinks' in the Stan Parrish system can be worked out.

Their schedule also provides a divisional crossover game at Buffalo, the last time they played UB (In the regular season) the cards smacked around the Bulls 49-14. UB was its own worst enemy as the Bulls turned the Ball over twice and committed more than 100 yards in penalties. Turner Gill did the the last laugh on Coach Hoke when UB beat up on Ball State's undefeated 2008 team the following year.

NIU seems to be their most important game, but the grudge match against Buffalo is not lost on some Ball State Fans.

Bull Run: Which game are you most looking forward to this season? Vengeance against Buffalo or legitimacy against CMU/NIU?

Over the Pylon: I'm not worried about CMU in the slightest. They are being lauded as contenders based solely on the last few years with St. Lefevour. There time is coming much like BSU after Nate said goodbye. And I will love it. The NIU game worries me simply because NIU is the biggest threat to take the west, at least in my mind. If we have any hope of competing for a conference divisional championship, then the NIU game is the most important one. The Buffalo game is personal to me, and I would love nothing more than to welcome Coach Quinn to the MAC with some justice for the 5#!7 show of the MAC Championship game a couple years ago.

OTP sees Ball State having an outside shot of winning the MAC west this season "Conservatively, 3rd in the MAC West, but realistically, I think we finish 2nd behind NIU but an upset against the Huskies and we win the MAC West.". I really don't see BSU being a factor in the west as the season rolls down (aside from spoiler). It's not because BSU is 'weak', talent wise they are a solid team and there is a ton of experience this year, but NIU is a cut above the rest of the west and most of the conference as a whole.

While BSU may beat up on CMU or WMU or Toledo chances are they are going to drop one, if not two, of these games. NIU losing more than one in the west is pretty unlikely but they do draw Temple as opposed to the Cards drawing Akron. BSU winning the west would not be earth shattering but calling their chances an 'outside shot' is like saying EMU has an outside shot at winning six games.

Looking at their schedule I have trouble finding a game likely to be their seventh win (again needed because of the two FCS teams) so unless they shock the conference and win the west they will not be playing in December/January this year.

Ball States dream season sees the Cards rise above most of the West, avenge themselves against Buffalo, and take advantage of a new regime in Akron. The Cards will pile up 5 conference wins, win their two FCS games and sneak into a bowl with a 7-5 record. Their nightmare season happens if the Offensive line does not get it together this year and Kelly Page lives on his back. BSU drops four or five in the west and one in the east. Their three conference wins are augmented by two FCS wins and a 5-7.

Because UB has to defend their 1 game win streak against the Cards (and the bragging rights that go along with it) My motivational poster for BSU hearkens back to 2008. 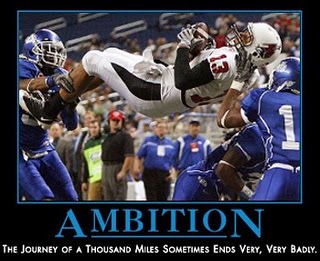