UB Fans, it could always be worse....

Share All sharing options for: UB Fans, it could always be worse....

UB is not the only MAC school experiencing turnover. As hard as its been watching several players leave the program at least we can console ourselves with the fact that they are leaving because of coaching personality or new offensive/defensive schemes...

Akron coach Rob Ianello, however, can only blame the loss of Zips standout defensive end on his inability to text message. 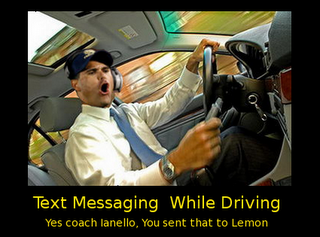 While reconsidering his decision this week, Lemon received an inadvertent text message from Ianello, intended for athletic director Tom Wistrcill. The message suggested that Lemon had spoke about transferring before, and he may be doing it to seek attention.

That was apparently the last straw for Lemon, who is putting together his highlight tapes and has prepared his transfer documents. --ROTZ

Other text sent by coach Ianello sent to the wrong person that day: