It's a shame that in college athletics there are really only two sports that generate revenue, and of the two only one has the potential to put an athletic departments budget anywhere near the black.

If sports like Track, or Indoor track brought in any kind of revenue, or regard, EMU would be more widely recognized as a respectable member of the MAC. But because most people focus on football EMU has a reputation for failure, a well earned reputation if you only consider football.

Its been nearly 15 years since the Eagles last had a winning season, and its been more than twenty since the Eagles played in a bowl game (great upset of San Jose state in the now defunct California Bowl). Because of this history, and some recent developments EMU is the easy pick for #13, or last in the MAC.

Last season the Eagles broke in Coach Ron English with what is statistically their worst season since 1949 when the then Hurons went 0-8. Despite the awful record the 2009 campaign featured some great near misses, they put a hell of a scare into Northwestern, came close to holding off fellow MAC cellar dweller Ball State, and mounted a near comeback against Akron, and they did much of this after losing Andy Schmitt (one of the better MAC quarterbacks) against Michigan in week three.

Part of the problem with 2009 for the eagles was Coach English's attempt to put a round peg in a square hole on offense. The offense handed down to him was actually not that terrible by MAC standards, they were a bit sloppy, turned the ball over a bit much but they were able to put points on the board (see the Temple and CMU games that ended the 2008 campaign). Coach English envisions a more smash mouth program which is great but you have to get the players to run that offense and EMU just lacked offensive line needed to wear an opponent down.

This season Coach English has to put a win on the board, if the Eagles go win less he could find his seat rather toasty in 2011. Near misses won't keep you around at 0-12, no matter how low the program was when you started. The challenge is going to be made all the more daunting by an amazing amount of coaching turnover, especially on defense, during the off season (Carter and Carter, Creehan, Lewis, and Szabo and Wheatley) and by a pretty difficult schedule:

After Week two there are only two teams that will potentially be near EMU's level (if Buffalo, Ball State both under perform a bit) and EMU gets them on the road. If the Eagles want to get Coach English his first win they better get it against Army or Miami.

The Eagles are also going to have to contend with a few unexpected departures this season including, perhaps, a quarterback (McMahon) who could have competed for the starting job:

Despite the mountain of hardships the Eagles may face this year this is some hope for improvement:
Alex Gillett showed some real promise as the season went on, he was thrown in last season in an almost impossible situation. After Andy Schmitt went down against Michigan Gillett got a token appearance in Ann Arbor before he and Kyle McMahon played Quarterback by committee until week nine when Gillett  took over for good. In those three weeks he played he role of quarter back well enough, as a freshman, to be impressive, especially with his feet racking up 285 yards rushing in his last three weeks.


Tight End Ben Thayer was not exactly a pass catching machine but he was consistent enough to get noticed by Phil Steele who pegged him as the fourth best tight end in the conference going into 2010. He really stood out against Temple where he and Jacory Stone almost single handily kept the Eagles in the game. The cupboards are pretty bare at wide out but a sure handed Tight End may make Gillett's life slightly more bearable.

The offensive line is now chalked full of experience and they have had a season to recover from an injury plagued 2009, they also will have increased depth.

On defense Brandon Slater has the potential to lead the defense into a slightly better season than 2009, granted in 2009 EMU gave up more rushing yards than anyone else (in fact they gave up more yards against the run than most teams give up against the pass). A complete new staff means some adjustment for the unit but it should be close enough to the philosophy of last seasons defense to make the experience gained in 2009 meaningful. Of course Lavon McCoy could be a game changer, the massive Juco has the potential to dominate the line and if that happens the Eagles may be surprisingly competitive.

It's hard to see the Eagles winning any games this season, the team may look a bit better in certain areas (offensive line, quarterback) but there is not going to be enough of an improvement on defense to keep games low scoring and until that happens the Ron English offensive philosophy hurts the Eagles more than it helps. Last season the Eagles were a completely one dimensional offense, look for them to repeat that due to both the departure of Jacory Stone and the questionable passing of Alex Gillette which needs more than one season of growth to become a factor.

As indicated above, EMU's best shot for a win comes in week's one or two, if they nail either of those games than all 2009 needs to be successful would be to play close in a few other games. If the eagles manage to beat Army and Miami then Ron English should receive some support for MAC coach of the year, seriously.

The Eagles Dream season start 2-0 and then takes advantage of a Rebuilding Buffalo and/or a Ball State team that is in year number two of their rebuilding to finish with 3-4 wins. The nightmare is a season where the eagles drop all twelve games, and do so while being completely non competitive.

My demotivational poster this season for EMU is: 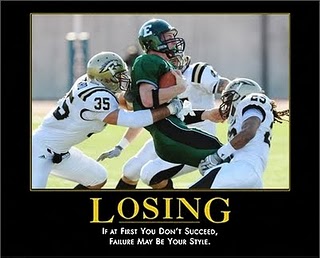