Share All sharing options for: Bulls Qualify For MAC Tournament 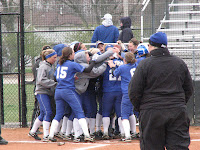 Congratulations to Head Coach Jennifer Teague, her staff and players for reaching the MAC Tournament for the first time since 2005!

Everything fell into place for the Bulls today. But I think that the come from behind extra innings win over Central Michigan last weekend is the game to look back on as key to Buffalo advancing. The Bulls came from behind twice---once in the bottom of the 7th inning, and once again in the bottom of the 11th inning---and finally won the game in the 12th inning. It was that "never say die" attitude that gave the Bulls a fighting chance today.

So the Bulls extend their season and will play at least two more games beginning Wednesday in Akron, OH...and who knows what may happen? I'm sure this is special for the seniors who have never had a chance at post season play. And for the young players, it will be great experience. It's not official, but I believe Buffalo will be opening against Kent St.