Brett Hamlin to tryout with the Falcons

Share All sharing options for: Brett Hamlin to tryout with the Falcons

Per Facebook: "Got the call finally.. Touchin down in Hot-lanta tomorrow.. Falcons!!! LET GOD" 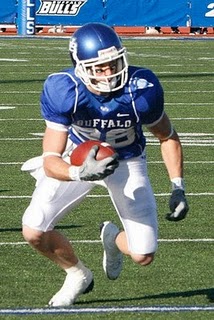 Rodney McKissic of the Buffalo news Hamlin confirmed via facebook that this is a a tryout..

The falcons have real talent sitting on their roster but their depth is questionable, still it will be difficult for an UDFA to fight his way onto the roster but just being invited for a tryout will increase Hamlin's visibility. Last season Drew Willy last only days in Baltimore before being picked up by Indianapolis.