Where does Buffalo fit in a post Big-Televen world? 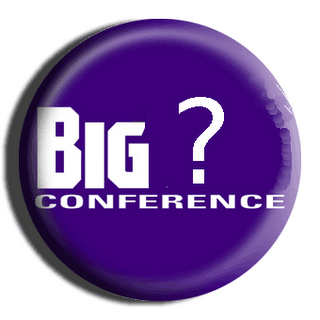 Aside from poking fun at the hysteria around BigTen expansion I have pretty avoided getting into it. The BigTen is not looking for a school ‘on the rise’ like Buffalo, they are looking for an established power. I have also avoided talking about it because despite all the noise I believed, in error, that there was no way the BigTen expands this year.

In the past few days the BigTen has all but confirmed they are going to add teams, yes more the ‘s’ indicates they will probably add than one team. If the BigTen adds more than one team they will augment their numbers by *at least* three schools. This would shake every conference in the bowl subdivision. Chances are the only BCS conferences left directly untouched by the BigTen assault will be the PAC-10 and the SEC neither of whom have any potential candidates.

But the PAC-10 would likely also look to play keep up after the BigTen gets done picking off members of other conferences. The Big East, ACC, or Big-12, may wish to grow to either fourteen or sixteen member conferences. The PacTen would also be forced to consider responding which will lead them to pick off a few teams from the MWC. All of the major conferences wrestling for position will end up impacting Conference USA, and the WAC. For my money if UB moves anywhere it will be to Conference USA but there is a very outside chance they could end up in the Big East.

Buffalo, despite being a newer division one program, brings a lot to the table but still has some glaring weaknesses that may scare away potential suitors.

On the plus side UB is an AAU school and a tier one state university. This makes UB one of the top hundred or so schools in the nation. Buffalo itself is the 45th largest metro area and one of the top 50 TV markets. Being a larger market may make UB attractive for other conferences. UB Athletics, since taken over by Warde Manual, has shown it can compete in D1 athletics. UB is bringing in hardware pretty regularly most recently winning the MAC Men’s Tennis title. By no means does UB 'own the MAC' but they are a factor in most sports.

On the down side is the community fan support. Because to the Bills and Sabres suck up most of the sports passion in Buffalo, and with UB being a relative new comer to the average Western New York sports fan, the program does not see too many outside of the UB community walk up and drop money to attend a sporting event.

·        The UB football team brought in just under sixteen thousand fans a game this past season, that ranks them at 102 among FBS football teams. While this is a marked improvement over 2005 (8,000 per game) it’s still about five thousand fans a game short of ‘somewhat respectable’ and nine thousand a game short of acceptable.
·        The men’s Basketball team is drawing around two thousand per game which puts it, also, among the lower tier teams. Back in 2005 the team was drawing over 4,000 per game that’s the level where they need to get back to.

There is also the matter of faculties, UB's training resources and venues are not even on par with the rest of the MAC, let alone the Big East. UB desperately needs the planned improvements that UB2020 and the Athletic department are pushing. Currently the Football team has to take a 45 minute drive to use the Ralph Wilson field house in Orchard Park when the weather is bad (during a Buffalo Spring) and they can be seen running sprints in the halls at Alumni Arena. The baseball and softball team are using the same resources that local Amherst high schools use as is the soccer team.

Potential New Field House from UB2020
So where does all of this land UB when the dust settles? My money is that they will still be a member of the MAC, a conference which will likely be mostly untouched by realignment. The Following are my scenarios and Probabilities for Buffalo in the post expansion world:

How this happens: If Syracuse gets passed over by the BigTen, the BigEast decides to stay under ten members, and if Conference USA loses less than three teams.

Why: With Syracuse in the upstate market the Big East won't even sneeze in Buffalo's direction. As to conference USA, They have a couple of schools in line in front of UB. If Temple is willing to go all in to C-USA they jump in front of Buffalo.

UB's Conference: The MAC might be forced to expand if the power conferences go to 14-16 teams. Firstly Temple will have stop sleeping on the MAC's couch. If they decide to take up full time residence look for one FCS team, or maybe WKU to be invited into the MAC so the conference can reach 14. If Temple moves on to the Big East, Conference USA, or tries life as an independent expect a quick move to get pick off someone from the SBC and a pick up of an FCS school.

How this happens: If Conference USA gets hit hard by the Big East or ACC when they have to reload or grow to 14 members.

Why: Aside from being a pretty young division one program Buffalo has too much to offer to not be a factor for a new 14 member conference USA which has to rebuild after a Big East Raid. If the Big East Raids they are probably going after UCF, and one other program (way long shot that it's Temple if Rutgers or Penn State get poached by the BigTen).

If they lose UCF and ECU the conference has a geographical decision to make they can either raid the SBC or the MAC. The SBB will keep down their travel cost but despite punditry brow beating it is still a conference which is pretty far behind the MAC. If they decided to go after the MAC they can pick of Buffalo, Temple, and Ohio. They would add north East Presence in NY, PA, OH and pair them up with Marshall, ECU and UAB.

UB's Conference: A conference USA that included Buffalo and Temple would be one that costs a lot more to travel in but would increase UB’s national profile, while not a complete doormat in the conference it’s pretty likely that UB would struggle for some time.

How this happens: If the Big Ten and ACC basically murder the Big East (Pitt, Rutgers, Syracuse, UConn, WVU) and the Big East decides to rebuild to 12-14 members. Buffalo would be in line behind UCF, Temple, ECU, and a hand full of other schools but would probably end up somewhere in the conversation because of the upstate NY market and the universities size and academic reputation.


Why: UB's TV Market, and the university's credentials make it one of the more attractive schools left after the other BCS conferences take their pick of whats out there.


UB's Conference: The Big East may still be a BCS conference but it will be one on life support, they are already seen as being 'marginally' BCS worthy and bringing in a bunch of Mid Majors is not going to help their cause.