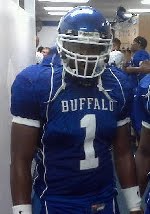 "We are very disappointed when players quit, we all are, it's not what I want in our program. Here's the other thing: We will not leave this program up to the weak, timid and non-committed." -- Coach Jeff Quinn

This makes at least six players who have left the program, already gone are Zach Maynard, Nick Sizemore, and Rich Perez (I may be missing someone). So far Maynard is the only starter to leave the program.

Willis was easily the best recruit ever to commit to UB up until last season, but academic problems kept him from committing to UB until after the 08 season and he was sidelined with injury last year. During the blue and white scrimmage this past weekend he was not among the starting linebackers, nor was he listed among the starters in this weeks summer two deep published by the coaching staff.

Willis was joined by Redshirt freshmen defensive linemen Matt Hornbuckle and Albert Sparks, who all informed Coach Jeff Quinn about their decisions to leave the team for personal reasons. Quinn told Rodney McKissic of the Buffalo news that players left shortly after the team's summer depth chart was released Monday afternoon.

From a fans perspective it stinks to lose these guys, all three had a real huge upside if they ever got it together on the field and in the classroom. On the flip side summer two deeps are often used by coaches to light a fire in under performing stars, if the trio is departing because mainly they are not starting it may be better for the team overall.