Feeling Re-Lee-ved about our young receivers

Share All sharing options for: Feeling Re-Lee-ved about our young receivers 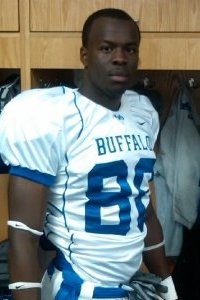 Fred Lee and Alex Neutz
have been making the most of Spring Ball
Aside from the Quarterback situation the only real worry this team has was with its receiving corps. The most solid prospect UB had coming into the year was Terrell Jackson (with just 26 career catches). The rest of the unit was comprised of untested youth and some spotty play in the 2009 season.

The offense put together by Greg Forrest and Coach Quinn relies on at least four solid receivers. Last season UB red shirted Fred Lee and Alex Neutz but this season, according to the coaching staff, both will likely see significant playing time.

Both have managed to impress so for during spring ball, a sign that once the timing is ironed out Jerry Davis will have a field full of solid targets for the new passing attack.

Wide Receiver Fred Lee made an acrobatic catch in the end zone, while being pulled to the ground by the defender. Lee was able to turn his body and dive for the ball that was thrown low and behind him. -- UB Athletics

Fred Lee impressed me the most at WR. he has the ability to adjust his body while the ball is in the air to position himself for the catch and 'box out' the corner -- Shep on UBFan.com

"What Alex brings to the table is a smart, savvy play maker, He’s a team player ... he understands what we’re asking of him and he has a role to commit to and I think he’s finding that. As his time progresses, he’ll be a guy we can count on in key situations come this fall" -- Coach Jeff Quinn

The emergence of Lee and Neutz are huge for this seasons passing game. But to Bull Run readers its not a huge Surprise, in a poll put out during the run up to spring ball Neutz and Lee did very well. In face both beat out all returning UB receivers except Terrell Jackson.