Edsall to ND: Join the Big East Or Else!

Share All sharing options for: Edsall to ND: Join the Big East Or Else!

So Randy Edsall threw out an ultimatum to Notre Dame... Funny that, because my wife and I were watching Demolition Man the other day and I would imagine that the Big East trying to throw an ultimatum to Notre Dame would go something like a scene from that movie. Remember right after Simon Phoenix escapes from the CryoPrison and is confronted by a squad of officers who are clearly outmatched. 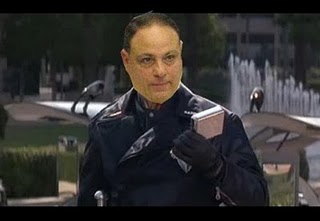 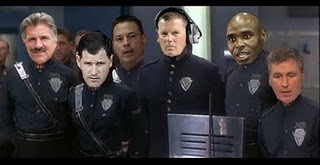 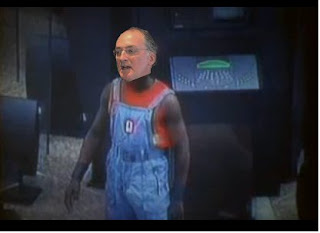 Jack Swarbrick: What's this? Eight of you. Such nice, tidy uniforms. Oh I'm so scared!
[Big East officials look at each other]
Jack Swarbrick: What you guys don't have sarcasm anymore?
John Marinatto: Nortre Dame has responded with a scornful remark.
Big East Coaches: Approach, and repeat ultimatum in an even firmer tone of voice. Add the words, "or else".

Well anyone who happens to be as into campy Action/Crime/Sci-Fi flicks as I am knows how well this worked out for the officers in that movie. Basically Notre Dame would impale one of the Athletic Directors on a wall (Probably Louisville) and proceed to lay down a beating on the other one with their fat NBC contract.

Brian Bennett at ESPN thinks such a move would be a gambit to stave off the Big Ten, and it might in fact be a genius move which could stabilize the powder keg that is Big Ten expansion. If Notre Dame called up the Big Ten tomorrow and told them that they are willing to join then the conference probably only goes to twelve members. The Big12, Big East, SEC, and ACC all stay untouched. The only pressure at that point might be on the PAC ten who, at most, would pick off a couple from the WMC or the WAC.

Issuing such an ultimatum to Notre Dame could help save the Big East, because it might -- emphasis on might -- push the Irish in the direction of joining the Big Ten to save their other sports. (Because, let's be honest, any ultimatum to Notre Dame would basically end the Irish's Big East involvement, because they are not joining the Big East for football.)

If the Golden Domers join the Big Ten, then perhaps that league is satisfied and doesn't raid the Big East for more teams. I'd still call everything in that scenario a long shot, but it's a gamble that may be worth taking now for the Big East. - Brian Bennett, ESPN

The risk in this is that NotreDame puts a beat down on the Big East and *still* does not pursue membership in the Big Ten. The Irish really, really, don't want to be in conference not when they have a BCS bowl guarantee for just finishing in the top 10 (someday) and can pick and choose all 12 of their games. No team is as well suited to be an independent as Notre Dame and this is a fact not lost on Jack Swarbrick or John Jenkins.

If the worst (from the Big East's perspective) should happen the exchange would greatly damage what little pride remains in the conference. The demoralized Big East may be more vulnerable to having one or two members picked off by the Big Ten and just like that Big East Football is done (save a desperate raid of Conference USA).

If the BE had dealt with their football problem between 2006 and 2010 by getting up to 10 or 12 members they would not be in so precarious a position right now..