Buffalo Sports Daily: Roosevelt will get offered by Bills if undrafted

Share All sharing options for: Buffalo Sports Daily: Roosevelt will get offered by Bills if undrafted 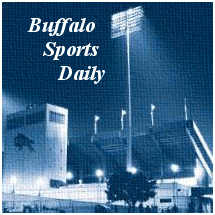 I’m told by a source close to Naaman Roosevelt that the University of Buffalo wide receiver will be offered a contract by the Buffalo Bills should he go unselected in the NFL draft, which begins tonight.

The same source tells me at least two other teams have been in contact with his agent, Dave Butz of Sportstars, Inc regarding his post draft availability.

Despite being one of the most productive receivers in college football over the past two years, Roosevelt was not invited to participate at the NFL combine. He did work out at the UB pro day in front of scouts for six teams, including the Bills.

Roosevelt did take part in Senior Bowl week and reviews were mixed. Critics panned that he had a penchant for dropping too many passes, something people who’ve watched UB football over the past few years know to be ridiculous.

He caught 70 passes for 954 yards and nine touchdowns as a senior last year. As a junior he set school records with 104 catches for 1,402 yards and 14 touchdowns.

CBS Sports has Roosevelt listed as just the 67th best wide receiver prospect. If he’s drafted he’s expected to go no earlier than the sixth round.

"There’s no doubt that he can run faster, UB receiving coach Juan Taylor said at the Pro Day. "When the ball is in the air, he’s going to outrun the next guy to get to it and he’s going to make a play."

Other UB draft-eligible players not expected to get drafted but hoping to get signed after include Mike Newtown, Jessie Rack and Bret Hamlin.

Running back James Starks will be drafted and is projected to go between the third and fifth rounds.