Not exactly where I hoped UB ended up, but given the sloppy play we have seen this year it could have been far worse. Had we lost to Ohio we might very well be on the road this Sunday. While some might count their blessings that UB has a "warm up" game to get their game together before Cleveland it's important to remember that UB was never able to put the Rockets away. 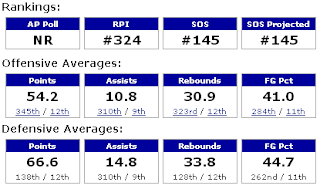 Any momentum UB had managed to capture against EMU, Kent, and Ohio was completely obliterated by the Miami Debacle. Perhaps a second go against Toledo is just what the doctor ordered. This is a game UB has zero excuses in, Toledo is among the worst teams in the nation, and only found out they were traveling to Buffalo late Friday night. If UB manages to take out the rockets they have a rematch with Miami.
Toledo has gotten better since the last time we played them the rockets have gotten a bit better (just ask Ball State) but the Rockets still do an awful job taking care of the ball.


Toledo's leading scorer, Jake Barnett, is also their leading three point shooter. But what this does not catch is that the Rockets have four players shooting better than 30% from beyond the arch. This is a recipe for disaster from UB's perspective.
Last time these two teams hooked up Toledo shot over 40%, which kept them in the game way alter than they should have, in fact for those with a shot memory it should be noted that UB and Toledo were tied with three minutes left. Jordan Dressler did a ton of damage, he was first among four Rockets with ten or more points.
The only reason UB walked away with the win last time is because they stayed out of foul trouble. When Toledo did get to the line they were terrible (2-6) and the Bulls were a pretty solid (13-18).
So what do the Bulls have to do to make it to Cleveland? Lock down Toledo's three point shooting, put the pressure on Barnett and force him to get into foul problems early.
Finally Rodney Pierce has to step up. If UB is going to make noise in the tournament it needs Pierce to be good. UB can win off a 'good' pierce showing if everyone else shows up (especially early) but in games where Pierce is MIA the Bulls are going to struggle to keep up, even against Toledo.