So far this off season most of the attention has been paid to the changes in UB's offense. Firstly because it's what Quinn's Cincinnati Bearcats were known for, secondly because UB is loosing the bulk of their offensive skill players.
As many coaches have pointed out while the names and emphasis on the spread will both change fans are not going to see anything that they have not seen in the past, they are just going to see more of it.

The past couple years, UB fans have seen a transition to some spread concepts. -- Coach Spieler

Where UB fans are going to see something radically different is on the defensive side of the ball. For years UB has run a pretty vanilla prevent 4-3 defense. Starting in the fall UB is going to move to some form of hybrid defense. According to Rodney McKissic the opening practice featured far more 3-4 than 4-3.

The defense might be more aggressive next season. The DBs are jumping and crowding routes instead of keeping everything in front of them like they have in the past. Coach Jeff Quinn said they will run a multiple defense but their base will be a three-man front -- Rodeny McKissic

There are going to be personnel issues in the new defense I will spend the net few days going over each position and the players who may be in line to fill them. 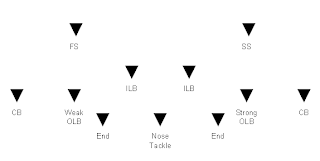 
Between the Buffalo News rundown of day one and this little bit of publicity about Colby Way, I suspect that UB will be looking at a every down hybrid defense. 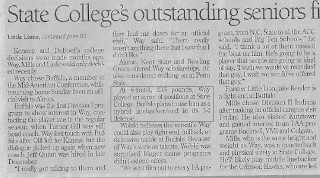 Thanks to UBFreind for sending me this
A hybrid defense will line up as a 3-4 or a 4-3 on any given down. The whole point of the hybrid is to match up closely with an opponents vulnerabilities. Hybrid defenses make their opponent prepare for every possible look and then they dictate what works best for them. While on paper this makes sense there are some real world difficulties in setting one up.
The first is that a 4-3 defense uses fast, smaller linemen who aim for the gaps. The 3-4 use big linemen who's primary objective is only to tie up the offensive line so that linebackers can make the play. The second is that Middle linebackers also have to be stronger, more able to take on run blocks that are absorbed by linemen in a four down set. Finally, at least one outside line backer has to be able to cover a tight end or half back and be strong enough to help stop the run.
It will be interesting to see what UB defenders are getting time as the hybrid linebacker spot on top of the normal corp of backs UB has several tight ends and full backs who have experience on defense and have good dimensions.