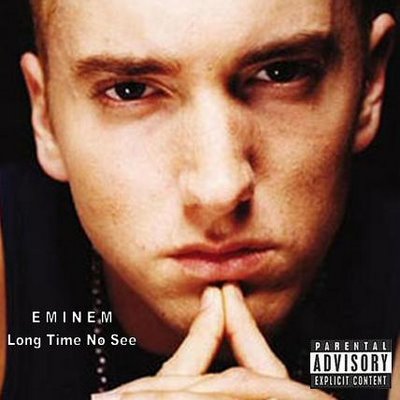 54 Days since UB has seen Miami...
After looking around a bit I find I had the wrong understanding of MAC tie breaking procedures. I had thought, in error, that if three or more teams end up tied you do a round robin between the teams, it turns out that's not the case. So with my new understanding here is what this game means to the Bulls.
If UB Wins they will be the fourth seed and host which ever team gets the honor of hosting Toledo in the first round. That's the easy one.
If Buffalo loses then two key games in the west determine our fate Central Michigan at Eastern Michigan, and Ball State at Western Michigan. Once the West winner is ferreted out then the remaining teams have head to head to head records compared (thats not a type), then record against highest seeds, and then a coin flip.
CMU (9-7) beats EMU (8-8) and BSU (9-7) beats WMU (7-9)
CMU (8-8) loses to EMU (9-7) and BSU (9-7) beats WMU (7-9)
CMU (9-7) beats EMU (8-8) and BSU (8-8) loses to WMU (8-8)
CMU (8-8) loses to EMU (9-7) and BSU (8-8) loses to WMU (8-8)
If Buffalo Wins, they get the bye, if they lose and WMU wins Buffalo gets the bye. But if Buffalo loses and WMU loses then the Bulls will be hosting a game in the first round. 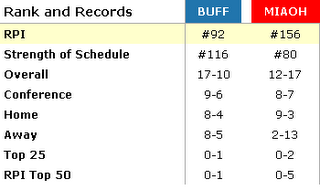 With that out of the way it's time to look at Miami. The hawks are going through a sting of performance similar to what UB did earlier this season. After going 5-1 through the West Miami is on a 1-4 skid, including an 0-4 record against the MAC. UB Snapped out of it's funk when they ran Toledo and EMU before a huge victory against Kent.
Miami's losses have been, for the most part, defensively respectable games. Only once in their current skid have they given up 70 or more points. Their offense, on the other hand, has never managed to get them over the top in the last four, very competitive, conference losses. Miami is four single possessions away from being tied with Kent and Akron for the division lead.
College Basketball Stats


UB's best chance of winning this game is on the boards. Unless UB's defense has been playing possum throughout the season they are not going to win with less than sixty points. The RedHawks may be on the skids lately but they are a very dangerous team.

Kenny Hayes is averaging 17 points a game over their last four conference losses, for the most part all of Miami's big guns have been firing well lately but the supporting cast has been rather unreliable. This is one of those games where UB needs to do what they can to get Hayes into foul trouble early. If they can force Hayes, Winbush, or Mavunga out early, in either half, they fall off is rather steep.