The MAC in the NCAA Tournament

Share All sharing options for: The MAC in the NCAA Tournament 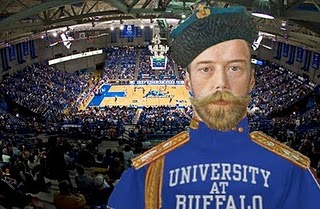 MAC in the NCAA

Ohio became the lowest seed in the MAC tournament to actually win it, doing so with the 9 seed. That means it won 4 straight games, the first one being a true road game. Ohio then easily handled the best team in the conference in Kent St, beat an impressive Miami(OH) team, and finishing it off with a thrilling OT victory against the defending conference champs, Akron. I highly doubt that anyone outside of Athens would have picked this to happen, but if you watched the way they played in the tournament, they absolutely deserved it.

This shows the parity in the conference year to year, but also goes deeper than that. This means that there are always several teams that are capable of competing with the big boys in the dance. If the 9 seed is good enough to get to the NCAA, that means that probably 3 or 4 other teams are just as worthy, and will probably do better than Ohio.
Most mid-major conferences only have one team that is good enough to actually be in the big dance, maybe 2. The MAC always has about 4 or 5 teams at the beginning of the year that can really be thought of to get there. Conferences that start like that at the beginning of the year have some familiar names. Conferences like this include the Missouri Valley, the CAA, the Mountain West, even the Atlantic 10. That's really good company to be considered with.

Those conferences get a lot of respect throughout the year, and even into the tournament. The MAC is getting to the level, they just need a few big wins in the regular season, and probably play a little bit better in the tournament. Recently the MAC has been pretty bad in the NCAA tournament, the only true showing was the year when Kent St made it to the Elite 8. This year Ohio drew Georgetown in the first round. Sadly for the MAC, that looks like its going to be a one-sided game, but Georgetown is a team that can play either really good, or be really bad, so you never know.

I know not having a dominant force who can win at least 1 NCAA tourney game every year doesn't make the MAC seem like a good conference, but it really is a good conference. If there were just able to get a few steals out of high school, the MAC could become a 2 or 3 bid team in the matter of a few years. Hopefully Ohio can put on a good showing to be the start of that.