I've missed MAC Blogger Pick'em so much that I decided to put a bracket challenge out to the MAC Bloggers. The response has been pretty good by several Blogs who did MAC Football Pick'em and a couple new faces to Pick'em.
I will keep updating these as the brackets come in today, two days off between the final seeding and the tournament means a lot of the blogs that wanted in may get in too late for me to post their brackets tonight but I will have them up in short order.
Scoring is as Follows:
I'm going to use the score of the Championship Game as a tie breaker if its needed.
Round 1: Pretty much everyone won out, The exception is Falcon Blog who had to make a hard pick on his tea and OTP who, as a football blog, made some bold basketball picks.

Round 2 (Early Games)
WMU/CMU (3 Blogs right, 3 Blogs Wrong): How do you blow a 13 point lead in eight minutes? Simle let David Kool get a hot scoring touch! CMU manged to do just that after keeping Kool completely out of the game early the Chips saw the WMU star turn around his teams fortunes in the second half. CMU managed to stave off the first leg of an eight minute Bronco's run, but CMU relented when the Broncos pushed again, with five minutes left WMU passed the Chip's for Good.
EMU/AKRON (All Six Blogs had this game right): It will be hard for any game in the tournament top top this, if Akron goes on to win then the Player of the tournament is Steve McNees, what a clutch shot to secure the second overtime. For his part Medlock had an amazing game but Akron just seemed fated to win this game.
As a side note: EMU's behavior in the last minute of the game was shameful, The elbow from Bowdry was completely unnecessary and while a coach should go to bat for his players but there is no point in Ramsey either questioning their call nor the language he used to do it.
Round 2 (Late Games)
Ohio/Kent (All Six Bloggers missed this)
Basset helped Ohio build a lead that was just too great for Kent to overcome. This despite the fact Ohio was literally trying to give away the game (15 Turnovers). Kent was plagued by terrible shooting from just about everywhere, including the charity stripe (35% FG's, 15% 3 Pointers, 50% from the line). This game cuts out one half of the Championship and, if Akron Wins it all eliminates Bull-Run, Kent State Sports, The Owl's Nest, and Over The Pylon from any chance of winning. In fact the one blog who is now in the Drivers seat is the Mac Daily.
Buffalo/Miami (Two Bloggers were right and Four were wrong)
Like I said going into the game, Pierce needed to have a decent, if not great, first half for UB to win, he was ice cold and the rest of the team followed him down. The game was pretty much over when Buffalo gave up a 17-0 run early in the first half, a strong second half (got to within a basket) was not enough to over come that.
Round Three
WMU/Akron (Every Blogger got Akron Winning)
Akron is living on the edge, and any questions about how far the west has come have easily been settled. Akron won tonight with six seconds left, they survived last night on a miracle three point shot. The days of the MAC West dragging down the conference's RPI may be nearing an end.
The Akron Victory means that either Kent State Sports or the MAC Daily will win the bracket challenge. If Akron beats the winner of the Miami/Ohio game then The MAC Daily wins it all, if Akron Falls then Kent State Sports wins.
Finals
Ohio/Akron (Every Blogger got this one wrong)
Akron's luck ran out, as Bassett and the Bobcats were able to defeat the supernatural forces that got Akron past EMU and WMU. With the Win Kent State Sports takes the first ever MAC Blogger Brackets Challenge.

Blogs Participating (Many will have good take on how they will see their teams fortunes playing out so be sure to visit them): 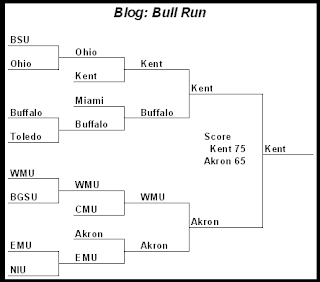 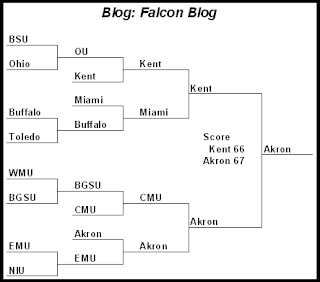 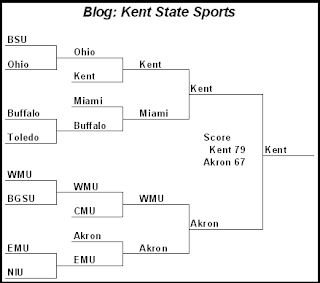 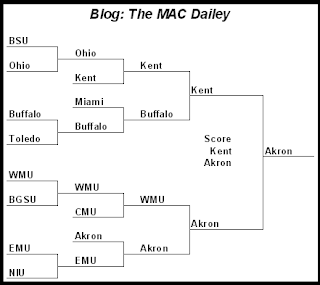 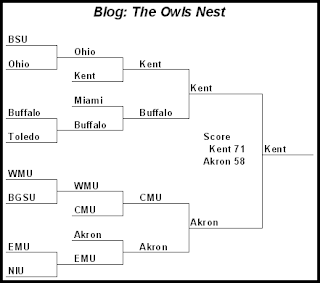 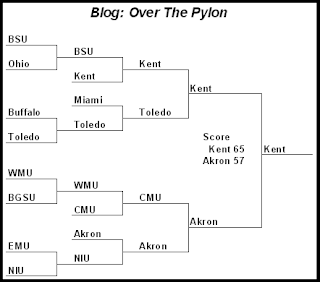