What do recruit rankings mean, really? By the numbers

Share All sharing options for: What do recruit rankings mean, really? By the numbers

Inspired by the constant bickering about which MAC team had the best class, and helped by the fact that NIU1981 did the initial leg work on Red and Black attack I decided to put something here, on Bull Run about the meaninglessness of recruiting rankings below the top 100 or so guys at all positions nationally

Ladies and Gentlemen I give you your 2009 MAC All Conference team (again per NIU1981's work) in all of its mediocre scout glory.

For the lazy, or people distracted by pretty pictures.... 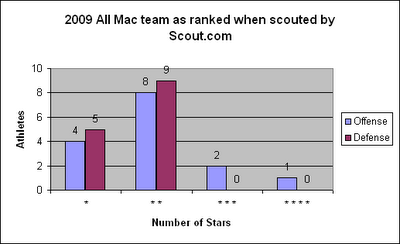 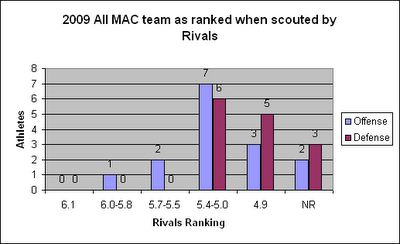 Now Before anyone gets it in their mind to think that these rankings are really representative of the MAC's recruiting keep in mind that the conference has ninety two players who were scouted as three star athletes between 2005 and 2008.


Even if we ignore 2008 because many players were red shirted you are still talking about sixty nine players, less than four percent of them landed on the all conference team this season. The All Conference teams were dominated not by studs out of high school but by Solid players who were found by coaching staffs who knew their true worth and programs that developed them.