UB Hockey, Sending off the Seniors in Style

Share All sharing options for: UB Hockey, Sending off the Seniors in Style 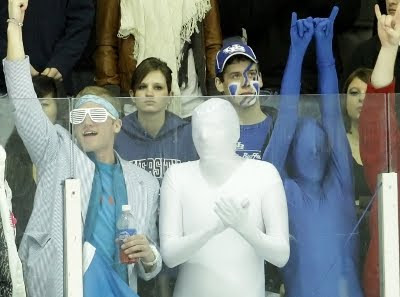 UB's "White and Blue Man Group" at senior night
Two things needed to happen in order to shake up the ECHL standings this weekend, fortunately for UB Syracuse shook off a close loss to the Bulls on Friday by downing Niagara on Saturday. At the same time UB followed up their Friday victory with a drubbing of Rochester to secure the third seed in the ECHL post season tournament.


Current ECHL Standings
For the most part the standings are pretty much set, there is a chance for Rochester to surpass RIT should the play manage to upend Robert Morris this coming weekend but aside from the bottom of the Barrel everyone else is staying exactly where they sit now.
Friday, UB 5 - Syracuse 4 (OT)

Freshman Tim Benner was the star of the night as his two goals, including the game winning overtime goal, lifted the Bulls over a scrappy Syracuse team.
The teams traded goals trough out the first period until late when Syracuse took its first lead on a Evan Tonkel goal. UB would then own the second period on Benners first goal, followed up by a Chris Kokkinis power play goal making the score 4-3 in favor of UB.
Half way through the third Sean Mitchell would score only seconds after Buffalo killed off an Eric Wilson interference penalty. The Mitchell goal made the game 4-4 where it would stay until regulation ended. With 4:16 left in overtime Benner sealed the game with an assist from Pat Beyer and Andrew Blocho.
Freshman John Fitzgerald would continue to pile on the points with three assist, his 44 points puts him second on the team to only Junior Kevin Fischer. 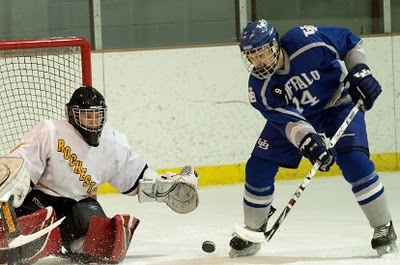 UB Forward Eric Wilson scored a hat trick on senior night
Saturday was Senior night at the Pepsi center and what Coach Sal Valvo would describe as a great crowd got to watch UB dismantle the University of Rochester. Senior Eric Wilson would make Senior night his by scoring a hat trick while adding an assist in a game that was effectively over by the end of the first period.
Freshman Tim Benner would score for the second consecutive night, as would Kenneth Wojnowski, Gregory Reed, Kevin Mahoney, John Fitzgerald, Craig Meany, Patrick Beyer, and Mike Collins. Nicholas Edison played a solid night in goal but was not too often, or too seriously challenged by UR.
During the game a coach Matthew Baumgarten was presented with an award by the team, commemorating his 100th win while at the helm of the Bulls (5 years). Next up for the Bulls is a trip to to number eight Oakland (Michigan) before heading to the ECHL playoffs where they will face Syracuse.