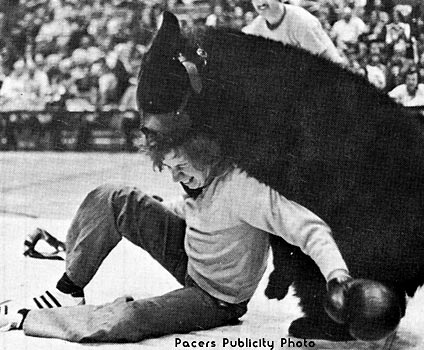 Ok so it might not be *that* hard, but still...
With the seeding set for the ECHL set UB has two games, and arguably their most difficult of the season, to warm up for the league tournament in Rochester. It's time for their last regular season road trip, this time to Oakland Michigan.

Oakland, an ACHA independent, is currently seventh in the most recent ACHA rankings, ten spots ahead of the best team UB has played this season (Robert Morris). The Grizzlies represent a challenge big enough to get UB back into the top 25 (they recently dropped to #26) should they mange to steal one of two games.
Beating Oakland, when at full strength, would have been difficult enough but UB is still missing leading scorer Kevin Fischer who will hopefully be ready to go by the time the ECHL playoffs start in a little over a week.
1) Who does UB have to watch out for?
Jordan McDonald and Kevin Kranker are both prolific, and balanced, scoring machines. Each has 40 points and between them they have 37 goals and 43 assist. Behind these two Oakland has a deep set of threats with five players having better than 20 points.
2) How good are their goalies?
The best UB will face this season, both Alex Pikunas and Matt Toter have a .90 save percentage and both have a GAA average under three and that's with a defense that gives up between 25 and 30 shots a game. Pikunas gets the bulk of the workload so its a fair bet he will be in one or both games, he has three shutouts this season.
3) How are they on the Power play?
45 of their 154 goals (nearly 30%) are on the power play, that makes their power play a more significant part of their offense than most teams. In their past five games they are scoring 23% of the time, that's pretty good considering three of their last five games were against Davenport who may be a Division two team but are the #1 ranked division two team in the central region.
4) How are they Short Handed?
Solid, and a lot of that is owed to Pikunas and Toter, in their last five games they have given up just three short handed goals and one of those games was an absolute blood bath against CMU where Oakland had ten penalties called against them.
They don't score a ton of short handed goals, but on the whole they are not a high scoring team.
5) What to expect form the game?
It's going to sit on Latona (or whoever is in net) for UB. With Fischer out I don't see UB putting up a ton of goals so *if* UB is going to win one of these it's going to be behind solid defense and smart play (avoid the stupid penalties).