Time to neuter the Bobcats...

Share All sharing options for: Time to neuter the Bobcats...

Well You head Bob Barker
I'm still not over that shameful loss to Akron but given that the Ohio game is now huge in terms of UB getting a bye for the MAC Championship. By the way the Basketball team should know that tipoff is at 7:00pm, the seemed to be some confusion in the Akron game as the team did not show up until about eight minutes into the game. Well we have video evidence that the Seniors know when this game starts...

So in come the Ohio Bobcats for senior night, UB has a chance to answer for one of the worst drubbings they took this year, they also have a chance to take the drivers seat in the spot for the #4 seed (Miami is drawing Kent). 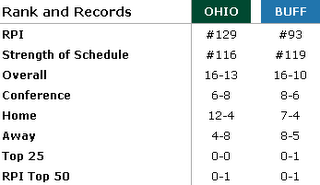 Ohio is on the tail end of the log jam in the middle of the conference, a spot they have clawed their way into after losing their first four conference games (they have since been 6-4). Their only losses in the time were to Akron, Kent, EMU and Ball State.
Ball State, Buffalo, Miami, WMU, CMU, EMU, Ohio, and Bowling Green are all mathematically still in the race to take the #4 seed this season. While the odds of Ohio or Bowling Green pulling off the 4 seed are slim an Ohio win over Buffalo makes a home game in the first round very likely as CMU and WMU play each other.
NCAA Basketball

Don't let Buffalo's advantage in shooting fool you, last time these two teams play Ohio shot 50% from beyond the arch. Tommy Freeman went 5-8 on his way to a 27 point showing. Part of the reason for their success was UB's total lack of pressure on the perimeter, Ohio shooters had all day to make their shots, UB's offense played OK in that match-up just not good enough to keep up with the Bobcats.


While it was Freeman who lit UB up back in January UB also has to keep an eye on Cooper and Bassett in check. Cooper had been really hot until the past two games when his minutes, and points both started to fall off but despite lagging the past two games his 33 points against Akron and 23 points against Kent gives reason to think he could be a factor in this game.
If UB can keep Ohio'3 three point shooting under 40% the seniors should finish, in front of the home crowd, with a win setting up a huge game next week in Miami.