Time to make a gelding

Share All sharing options for: Time to make a gelding

This might pinch a little
I'm still not sold on this team, dropping 95 on NIU is a sign that maybe, maybe, our offense is back on track but then again NIU is not exactly a defensively strong team. On the flip side of getting within shooting distance of the century mark there is the 80+ points we gave up. I will not be jumping back onto th bandwagon unless the win their next four games against the west. This team has so much to prove to themselves. The stings of Kent, Ohio, and Ball State are not going to be erased by pounding the Huskies nor beating the Bronco's tonight (though that would be a really good start).
At a game back on both Kent and Akron UB can not afford to trip up if they want a first round bye in Cleveland (Right now it would Be Akron, Kent, CMU and Ball State). 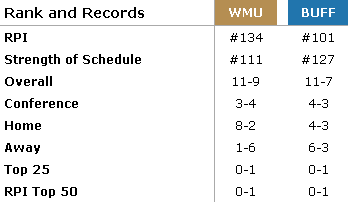 WMU may provide a good test to see if UB has shaken off their annual SOPP (Streak of Poor Play) but winning alone won't make me think that this years team is ready to turn it around.
College Basketball

Strength of schedule aside WMU and UB match up pretty well, Neither team is decidedly better in any area of the game (maybe you could give a clear nod to WMU on the offensive boards).


UB has to lock down David Kool, like Bernard Pierce he is the key to his team being successful, without him they become a very mediocre team. He shoots very well and accounts from more than 30% of WMU points.
College Basketball

He also shoots nearly 40% from behind the arch, something that nobody has had trouble doing to the Bulls of late. This is the most player oriented team UB has faced to date, after Kool the next leading scorer is Martelle McLemore who is getting just ten points a game.