So how far as the Mens Basketball team fallen?

Share All sharing options for: So how far as the Mens Basketball team fallen?

We will find out just how much this team can under-perform when, this weekend, they make the trip out to Toledo to take on perhaps the worst team the MAC (Jury is out on that until after the weekend). 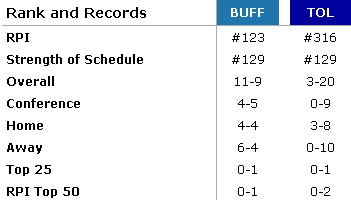 UB's defense has been shameful. Letting team after team lite them up from everywhere on the floor. Only a sharp offensive performance against NIU has kept this team from being on a six game slide. During this six game streak they have held just one team to under 80 points (Ball State) and just one team under 50% FG shooting (NIU).
UB Opponents Shooting %
For anyone wondering that's 52% Shooing and 52% from three point land, on average, per game. With number like that even Toledo is a threat, I would only be moderately surprised if UB drops this game as its on the road and they have been playing like a team with an RPI in the 200's.

Clearly the big problems Toledo has been having is with turnovers and rebounding. Like the Ball State game expect UB to put up a good deal more shots than than the Rockets, but if they cant hold Toledo to their season average shooting (46%) or play far above where they have been offensively those possessions are not going to matter.

So what does all of this mean to UB? Toledo's leading scorer is also their leading three point shooter. But what this does not catch is that the Rockets have four players shooting better than 30% from beyond the arch. This is a recipe for disaster from UB's perspective.
On the plus side for UB is that the Rockets have managed a respectable margin in just one conference game this season (against NIU). If the Bulls can not spend the first five minutes fumbling about and build something of a lead Toledo does not possess the tools needed to chip away at it.