Kent is the SAT for the Mens Basketball Team

Share All sharing options for: Kent is the SAT for the Mens Basketball Team 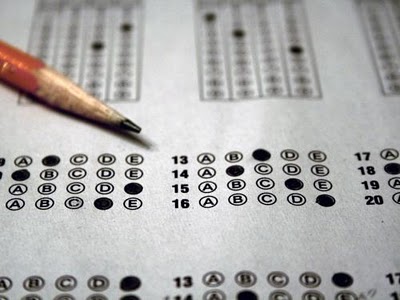 Right now we know that UB is somewhere between the bottom of the Western Conference and the top of the Eastern Conference. After finally righting themselves with two straight wins UB leaves the 'Easy' part of their schedule and moves into the teeth of the MAC against Kent, who began UB's decent several weeks ago when they destroyed the Bulls at the Convo center.
Brandon had Akron and Kent as his number one and two teams at the beginning of the seasons, and after eleven games (one against each team in the conference) that's precisely where they sit. If Buffalo wants to avoid having to play a first round game this season they are going to have to win at least three of their last five games, stealing one from the conference leader would go a long way towards making that happen. 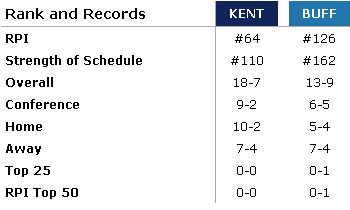 Kent dropped two of their first three conference games, since then they have been on a eight win streak. A streak of wins in which only one team (Western Michigan) was ever really in the game, in short Kent is easily the team to beat in the MAC right now. The Flashes draw Buffalo, Akron, and Bowling Green on the road so despite riding in the pole position they really cant give away a game right now.
NCAA Basketball


Offensively these two teams are pretty much on par with each other. UB may tend to turn the ball over a bit more than Kent but on the season they are a better shooting team.
The big difference comes on defense where UB has been horrid of late. The Bulls have shown improvement but can you trust how a team looks when the opponents are Toledo and EMU? The last time these two teams played Kent shot 65%

The Flashes put six players into double digits, and eight players who shot 50% or better from the floor and 5 who shot better than 33% from behind the arc. UB's offense was led by Boudreau and Betts as Rodney Pierce was held to 12% shooting.
NCAA Basketball


If Buffalo is going to stay in this game they have to continue to play the better defense that we have seen in the past week. Unfortunately Kent does not provide you with one, or two, or even just three guys to key on. No fewer than five Kent players are accounting for more than 10% of their points, with another being damn close to 10% of team points. So rather than hoping that Kent will get into foul trouble UB is going to have to keep contending shots like they did against EMU.
As a reminder the game is a 'Pink Zone' game, and part of a double header to support the WBCA cancer fund.