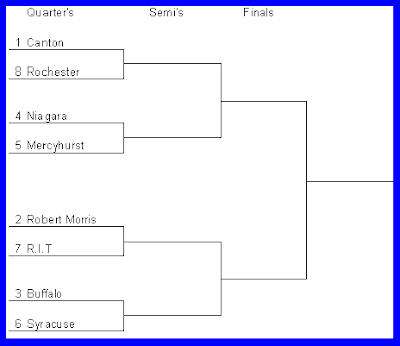 The table is set, time to take a bite out of the ECHL
Tonight the ECHL Championships Kick off, everything that had to happen for Buffalo to clinch the three last week came to fruition with UB Sweeping and Niagara dropping a game to Syracuse. The final standings are:

Buffalo will face off against Syracuse for the third time in three weeks, despite the fact UB won two games, and the fat UB has a much better record than Syracuse this could be a serious test. The Orange have been surging of late and have really distinguished themselves from the other teams at the bottom of the league.

Back in January Buffalo won in a shootout game at the Tennity Ice Skating Pavilion in Syracuse, then last weekend the Bulls needed overtime to put away the Orange, then the Orange would go on to knock off the then number three seeded Purp's.
Previous Games:
Game 1: Pregame, Box Score
Game 2: Pregame, Postgame, Box Score

1) Who does UB have to watch out for?
Syracuse: Syracuse is a team that has multiple players who can hurt you. Alex Lichorat, Mike Dillane, and Chris Leykam are the teams leading scorers while Mike McConney, and Wes Rene lead the team in Assist. Last week in Syracuse they again spread things out, netting only two goals but having five players register a point.
2) How good are their goalies?
Syracuse: The orange have effective goal tenders Rich Carlston is respectable but of late he has only been facing 25 to 30 shots a game.
3) How are they on the Power play?
Syracuse: Power play goals have not been easy to come by for Syracuse, the Orange are netting a goal just 10% of the time over their last five games. Alex Lichorat is the teams season leader with three goals on the power play this season.
4) How are they Short Handed?
Syracuse: On the season the Orange are giving up goals about 20% of the time (over their last four games), Last week against Buffalo the prevented UB from getting a power play goal mainly by staying out of the Box (Buffalo only had two chances)
5) What to expect form the game?
Syracuse: The Orange have proven they can play with the Bulls, but they have done so with UB's best offensive threat Kevin Fischer out. Coach Sal told me last week that they expect to have Kevin back this week if thats the case hopefully UB can out play Syracuse.