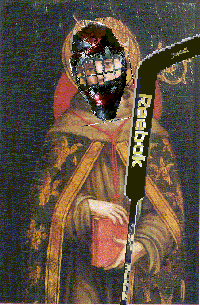 Saint Bonaventure have
Mercyhurst on us...
After last weeks split UB's margin for error has diminished to nearly nothing. With eight games left the Bulls find themselves as many points behind conference leader Robert Morris. While there is little practical difference between going into the ECHL League playoffs (#1 gets RU who is 4-11 and #2 gets RIT who is 5-20) it would be great to end the regular season ahead of the Colonials. Even if UB wins out the chances of the Colonials gaffing up four of the games left on their schedule but there is still playoff seeding to think about. While winning out won't, likely, get us the #1 seed it would clinch the #2 seed.
Current ECHL Standings
The reality is that in the ECHL the 'soft underbelly' of the division begins with Syracuse and goes down to Rochester. Mercyhurst is a better team than their record and played really tight with UB last week. It would be far better to enter the playoffs seeded number two (thus getting RIT or Rochester in the first round) than seeded #4 ( drawing Mercyhurst). Right now there are only two points separating those spots.

In addition to a grudge match against the Cyclones UB will make a trip to St Bonaventure. The word 'Terrible' comes to mint when trying to describe the season the Bonnies are having. At 2-9-0-2 they are hovering just over the basement of NECHL (they have Ithaca to thank for keeping them out of said basement). The only mitigating factor on the Bonnies side is they have played some Stiff competition, sitting atop of their division is a trio of pretty strong teams (Cornell, Cortland, and Rutgers) and the Bonnies have played mainly those school (they have only played 11 games this season).
1) Who does UB have to watch out for?
St Bonaventure: Luke Marchiori (Saint Joes, Buffalo) and Josh Piegay (Timon, Buffalo) are the main threats that St. Bonaventure brings to the ice. Marchiori is second on the team in Goals (10) and first in assist (9), while Piegay is first in goals (11) and second in assist (6). After Piegay's 17 points Vinny Judge with ten points in ten games warrants keeping an eye on.
Mercyhurst: Stopping the Cyclones is going to involve holding up the same duo as UB had to do last week.Shane Vorndran and Josh Mandic still account for a more than a third of all Mercyhurst goals and a just under a third of all assist.
2) How good are their goalies?
St Bonaventure: It's hard to judge, none of their goaltenders has put in more than ten games and the games played have been against pretty solid squads. Their go to guy, senior Byran Lembo, has faired respectably (5.3 GAA) against teams at or above Buffalo's calibar. When Lembo is not between the pipes the Bonnies give up goals in bunches including 13 to Cortland last week.
Mercyhurst: Their recent hot play between the pipes continued through last weeks game against Buffalo. Alexander Larrson-Wahlman stopped 30 of 32 shots and in doing so kept the Cyclones into the game until the waining minutes of the third period. The week before they met up with the Bulls Robert Kelly who would stop 47 shots against Pitt. Either Goalie can keep the cyclones around if he is on his game.
3) How are they on the Power play?
St Bonaventure: A respectable 23% on power plays over the past four games, though there have been several extend (4 or more) minute power plays and a fair share of two man advantages. The one thing to note about their power play is that the spread it around. In their last four games four different Bonnies have netted a goal with the man (or two) advantage.
Mercyhurst: Aside form the low scoring affair in Buffalo last week the Cyclones have been riding something of a hot streak while up a man. They were at 30% in the games leading up to Buffalo with Josh Mandic, Brian Nagy, Nelson Hamwey, Mark Loecher, Mike Herhal, Matt Leitzel, Doug Stanton, Shane Vorndran all scoring.
4) How good are they shorthanded?
St Bonaventure: The Bonnies rarely get into penalty trouble, in their last three games they have been a man down just eight times. Though against Cornell, in overtime, one of those instances was deadly. Over their past four games their opponents are scoring 30% of the time, so if they play an out of character game (like they recently did against Rutgers where they found themselves shorthanded nine times) there is a chance for UB to do some real damage.
Mercyhurst: The cyclones are good and reducing chances while down a man and they are very dangerous. Their opponents score just about 8% on the power play but what boggles the mind is that in the stretch leading up to last weeks game they were actually out scoring the opposition when Mercyhurst finds them selves down. Four power play goals in those four games (two by Shane Vorndran, and one a piece by Josh Mandic and Chris Madina) double up the number of power play goals they have given up (2/23).
5) What to expect from the game?
St Bonaventure: Assuming the Bulls have their heads in the game and they can lock down Marchiori and Piegay they should not lose this game. I would be very surprised if this is, on UB's end, a low scoring affair so if the Bulls can get two goals up and work their way into the head of the St Bonaventure squad they should rumble.
Mercyhurst: Second verse, same as the first

UB will get their power play chances, and they have to be sure to not let them slip through their fingers, they have to be really sure not to give up the short handed goals. The Cyclones have been markedly improved on defense as of late so Latona is going to have to match up well with Kelly. -- Last Weeks Article

Latona is going to have to be on his game but Buffalo should be able to limit quality chances. The real question is can UB stay out of the box.