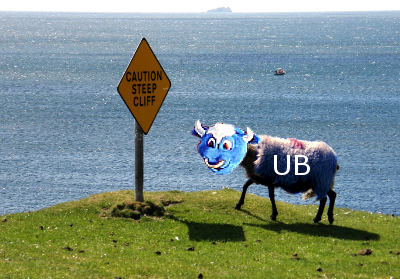 Am I being too dramatic?
Last week I had UB Basketball on the moon, now I see them as a few steps away from falling over the edge. If that seems a little bit manic depressive then you must have missed either the Akron game or the two debacles that followed. Kent was a digestible loss for UB fans, firstly KSU is a top 100 team (in terms or RPI) who *barely* lost their first two conference game and UB always plays awful at Kent. But giving up nearly 100 to Ohio? after the reality check in Kent?
Now we enter west play. BSU was the only Western that beat UB last season, this time if the Cards making the cross conference time to Buffalo. This is the earliest must win game for Buffalo in recent memory because if UB drops this one they will probably be behind both Akron and Kent. When you factor in CMU and NIU in the west Buffalo is in real danger of losing the first round bye in Cleveland this year.
Beyond just getting a conference road win the Cards may be looking to exact revenge for UB bouncing them out of the MAC tournament last season, and then there is the 2008 Football championship which still gets mentioned with a bit of bile among BSU fans. 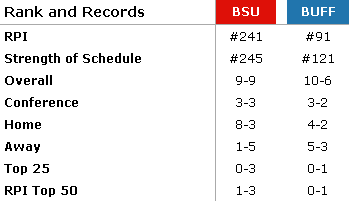 Buffalo has a golden chance to end their losing streak before a difficult road game against NIU this weekend. On paper BSU is one of the weaker team in the MAC and on the road they have been terrible, then again UB's past two performances have erased a lot of the meaning behind there top 100 RPI.
Both teams have played Purdue and the Cardinals managed a much stronger defensive game than UB, holding Purdue to 69 points, in fact despite the record, and the three games against top 25 teams the cards defense has held up extremely well giving up less than sixty points a game.
How does UB stack up against Ball State?

The players who UB really needs to watch out for are Jarrod Jones, Jauwan Scaife, and Malik Perry who are all averaging more than ten points a game, Jones is also leading his team in rebounds with nearly eight a game.
BSU will likely bring a strong defensive game, UB will have to dig down and find a defense of their own. When two teams in a row lite you up from everywhere on the floor its not that they are lucky its that you're giving them something to hit. Unless UB comes out and matches their effort from the Akron game I don't see them going much over 65 points so the task is for the defense to hold BSU down somewhere in the 50's, with Jauwan Scaife's three point shooting that might be more difficult in reality than it may seem on paper.
If there is one thing UB has going for them it may be that Ball State apparently really wronged someone in the MAC scheduling office. UB catches Ball State in the mist of a five day, three game road trip to Miami, Buffalo, and Ohio.