Share All sharing options for: UB Hockey Splits the Weekend

UB Went into this weekend with the knowledge that if they swept, and got a little help from Niagara they would end up just two games behind Robert Morris. While Niagara held up their end of the deal UB was unable to take care of business on Friday night. The end result is everything remains the same. UB Has an eight point gap to make up on the Colonials and now just eight games remaining.

Friday the Bulls missed several key chances and in doing so let Robbert Morris build up an insurmountable lead in the second period. The Colonials Power Play absolutely killed UB going four out of five leading them to a 6-2 victory in the Pepsi center.

RMU forwards Bryan Chiavetta and Luke Bennett each netted two goals. While the scoring touch of UB's usual standouts took a night off as John Fitzpatrick was held to just two assist and Matt Ganci was kept completely off the board.

On the plus side UB's student attendance, for both games, was impressive both in numbers and in enthusiasm. Robert Morris Coach Jason Evans commented to the UB staff on how the hundred plus UB Faithful in Face Paint and Blue wigs were the best crowd he has seen all season. Coach Sal Valvo wanted me to thank the students for coming out and supporting their team. Most of UB's remaining schedule is on the road but there are two more home games this season, and a game across the county line in Niagara.
Saturday UB got back on track, and took out any lingering frustrations on Mercyhurst (at the same time across the county line Niagara took care of Robert Morris). 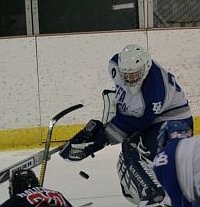 While Ganci and Fitzgerald got their scoring touch back the standout of the night was net minder Rich Latona who carried a shutout into the last minute of the game before giving up his only goal of the night (on 33 shots). Latona would also add an assist, making him a part of scoring as many goals as he gave up on the night.
An early first period goal by John Fitzgerald would hold for two periods, and well into the third before Matt Ganci netted his first of the night at the 5:21 mark of the third period. The Cyclones would start to pull their Goal Tender with around two minutes remaining, Ganci used the empty net to score his second goal of the night before Brian Nagy of Mercyhurst would end the shutout bid with 56 seconds left in the game. UB's Timothy Newbold would score the second empty net goal of the night with five seconds left.