Share All sharing options for: Trevor Scott, The positional nomad, found a home 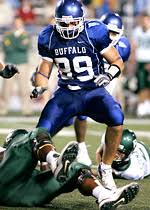 When Trevor Scott was recruited to Buffalo in 2003 it was for his aptitude as a tight end. After red shirting a year he would play, in a limited capacity, as a tight end during the 2004 and 2005 seasons. After two years at UB Scott had recorded nearly as many tackles (8) as receptions (9). With James Starks and Naaman Roosevelt coming on board the amount of work he would see as a receiving tight end would not have grown that much.
When Turner Gill came on board he inherited a team with little to no effective pass rush, Scott's size, football intelligence, and experience (in high school) at the position made him a natural fit.

In 2006 Scott would set the UB FBS record for sacks (9) and go on to break his own record the following year (10). His performance landed him a spot on the all MAC team and the Oakland Raiders roster as a sixth round draft choice.

The one knock against Scott coming out of college was his size. While he possessed great speed, strength, and intelligence, there were some questions about just how well he would handle the lager offensive linemen he would face at the next level. Used mostly as a role player during passing down Scott had a very effective rookie year for the raiders racking up five sacks something that put his name on a list for NFL defensive rookie of the year.
2009 started much the same way 2008 played out, Scott had bulked up a little and was seeing slightly more time but still was mainly seen as a role player. After week ten Oakland defensive coordinator John Marshall approached Scott about switching to weak side linebacker. Like the change he went through under turner Gill the move has brought out the best in Scott who has seen his role grow.
* Converted to Weak side LB or 'Elephant Back'

Scott averaged one sack a game after assuming the role of 'Elephant Back' which is described as a linebacker most of the time and defensive end in certain situations. Scott is new to pass coverage but his high school and early college career as a tight end, along with his speed, gives him the ability to do anything from coverage out of the backfield to taking a spot on the line for the pass rush.

"Trevor does a lot for the team in that role because it opens up a wide variety of things for us, He can cover receivers, blitz or put his hand down and rush. His versatility allows us to do many things off the same -- Oakland Raiders Linebacker Isaiah Ekejiuba

The surge in sacks towards the end of the year put Scott in a tie for the team lead in sacks, for the second straight year.